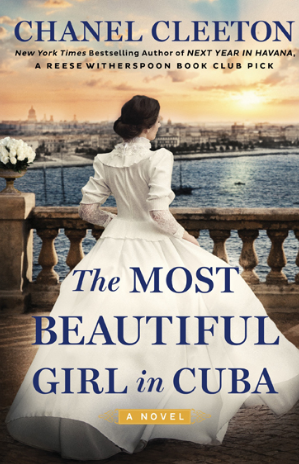 The Most Beautiful Girl in Cuba
Series: The Cuba Saga, #4
Author: Chantel Cleeton
Publication Date: May 4, 2021
Publisher: Berkley
Genre: Historical Fiction, Women’s Fiction, Romance
Note: This review is for an ARC and is my unbiased opinion.

At the end of the nineteenth century, three revolutionary women fight for freedom in New York Times bestselling author Chanel Cleeton’s captivating new novel inspired by real-life events and the true story of a legendary Cuban woman–Evangelina Cisneros–who changed the course of history.

A feud rages in Gilded Age New York City between newspaper tycoons William Randolph Hearst and Joseph Pulitzer. When Grace Harrington lands a job at Hearst’s newspaper in 1896, she’s caught in a cutthroat world where one scoop can make or break your career, but it’s a story emerging from Cuba that changes her life.

Unjustly imprisoned in a notorious Havana women’s jail, eighteen-year-old Evangelina Cisneros dreams of a Cuba free from Spanish oppression. When Hearst learns of her plight and splashes her image on the front page of his paper, proclaiming her, “The Most Beautiful Girl in Cuba,” she becomes a rallying cry for American intervention in the battle for Cuban independence.

With the help of Marina Perez, a courier secretly working for the Cuban revolutionaries in Havana, Grace and Hearst’s staff attempt to free Evangelina. But when Cuban civilians are forced into reconcentration camps and the explosion of the USS Maine propels the United States and Spain toward war, the three women must risk everything in their fight for freedom.

I have been a fan of Chanel Cleeton’s Cuba Saga since I read the first book. It’s been a delight to learn more about Cuba, its history, the people, and its relation to the United States through her words. Each book has a told a different story through multiple view points. The same was done with The Most Beautiful Girl in Cuba. For this review, I’m going to tell you a little bit about each character and then I’ll sum up my final thoughts.

Grace Harrington – Grace wanted desperately to be a newspaper reporter like Nellie Bly. In order to become one, she found herself entrenched in the battle between the Journal and the World papers. This battle brought her attention to the one going on in Cuba. To be honest, it took me a while to get into this character’s story. I wasn’t immediately drawn to her desire to be a newspaper reporter. Once I got several chapters in her point of view, her involvement in the story became more fascinating to me. That was good because the majority of this book seemed to be in her POV. I also enjoyed Grace’s interactions with Rafael.

Evangelina Cisneros – This was the POV that I kept wanting more of. Evangelina was a real life person who went through some horrible things in Cuba. I could tell Cleeton did her due diligence researching her plight and life. I, like Americans of the time, found her life fascinating. I could have read a book entirely in Evangelina’s POV. I would have liked more of it in this book.

Marina Perez – It’s always nice to learn more about the Perez family. I found her backstory to be very interesting and her current life situation as well. I liked how her POV tied the story together. Marina was probably the least fleshed out character with the least amount of time spent on her POV. I would have loved more inclusion of her in this story.

Now for more on the book as a whole…

I found the subject of the Cuban Revolution to be incredibly interesting. I hate to say that I knew nothing about it prior to this book, but I knew nothing about it. I loved how Cleeton used real life inspiration to craft her story and create her characters. Each woman’s tale was well written and inspiring. I do have to mention that at times I found The Most Beautiful Girl in Cuba to be quite information heavy. It had more information than her past books in this series and less focus on the romantic relationships. Being a romance reader, I missed the focus on that aspect. That being said, it was still a great read that fans of this series are sure to love.