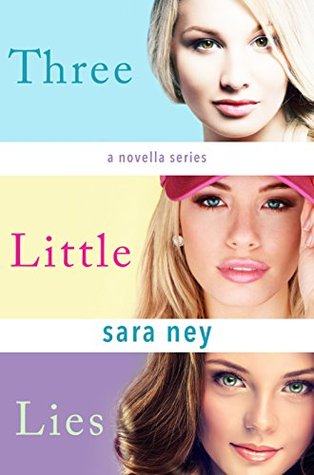 Lies, lies, lies; everybody tells them….
Greyson Keller didn’t intend to lie; it just came out that way. So when the object of that lie shows up on her doorstep, she is confused, shocked, and embarrassed.

Calvin Thompson is an Ivy Leaguer, attending University over an hour away, playing rugby and basically not giving a crap. So imagine his surprise when some guy named Greyson begins rumors online that they’re dating — the only logical solution is to drive an hour and confront him…

Be there when Greyson and Cal finally meet face-to-face because. Sparks. Will. Fly.

Secrets, secrets, everybody has them…
Tabitha Thompson is many things, but a liar isn’t one of them. Unless you count the sexy secret she’s spent a year hiding from everyone: her friends, her family. The secret she never counted on anyone discovering…

One chance encounter.
One clumsy mistake.
One sexy discovery.

Now, only Collin Keller stands in the way of her secret–and everyone else. And he just may be the one who ruins it all. Tabitha Thompson, you secretive little sneak…

What if…
Someone you barely knew asked you for a favor.

What if…
They needed you to be something you weren’t, in exchange for nothing. Unless you count a mouth full of lies and a half-broken heart. Faker. Pretender. Liar. There are worse things to be called.

So would you do it? Would you?
Daphne Winthrop did.
And you’re about to find out what happens in the end.

***This novella series is intended for a mature audience, 17+ due to sexual content and foul language.***

Three Little Lies is the combination of all of Sara Ney’s #ThreeLittleLies novellas. Each book has its own main characters, but it is best to read them in order because each one introduces us to the characters that will be starring in the next book. You could read them as standalone novellas and not in order, but that could ruin some of the fun. Here are my thoughts on each book…

Things Liars Say – ★ ★ ★ ★
I adored this novella! It was hilarious how Greyson and Cal met and fell in love. There wasn’t anything I didn’t love about it. It was exactly what I expect from a Sara Ney romance.

Thing Liars Hide – ★ ★ ★ ★
The way this book started out KILLED ME! It was so perfect. Collin and Tabitha were perfect. I completely got why Tabitha lied the way she did. I loved that Collin knew what was up. Too cute!

Things Liars Fake – ★ ★ ★ ★
Adorkably cute. That is how I would describe Dexter and Daphne. They were both so awkward and yet fit together perfectly. I loved how Dexter’s family played such a big part in their story.

Overall, this series of novellas was fun, hilarious, and sweet. I adored them all, but I did have a few things that bugged me a bit. One, they all heavily use texting or email in them. I like how they were used, but it’s relied on almost too much when used in all three novellas. Second, all of these stories, with the exception of the first novella, felt too rushed. I really wish they weren’t novellas but full length novellas. That’s probably just me being greedy, though. I wanted more…