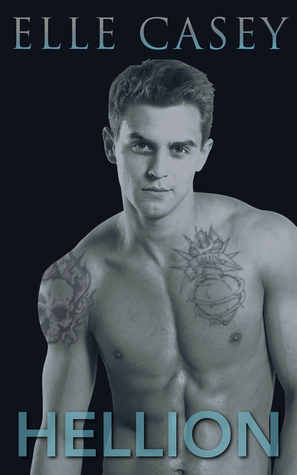 Quinlan Torres is planning ahead for her future. She needs to finish college and get out on her own. She also has a lot of responsibilities: school work, her younger brother Jersey, and helping her best friend win back her deceased father’s company. The last thing Quin has time for is a guy.

If only Quin’s best friend didn’t have a boyfriend with a smoking hot brother. Maybe then she could actually stick to her plan. But each time they see each other, they get closer and closer to combusting…

Last week I read Rebel, the first book in the Rebel Wheels series. I loved it. It was a fun NA romantic suspense. There were so many great one liners in it. It didn’t quite end in a cliffhanger, but there were still some unanswered questions. So, of course, I had to read Hellion.

Hellion was just as much fun to read as Rebel. Quin was just as snarky and hilarious as Teagan. She has such a potty mouth! I loved getting to know her and her family better. Her family — Jersey especially — was so cool. It was also fun to see her get all flustered by Rebel’s brother(s).

In keeping with the book description, I won’t tell you which brother Quin falls for. I’ll just say the tension between them was incredible. So were their hot and heavy moments.

I really enjoyed reading Hellion. It was almost as amazing as Rebel. My only big complaint was how quickly the story wrapped up. There was a huge build up to Quin and her hellion getting together, but once they were their relationship moved too quickly for me. I can’t explain it without giving too much away. It didn’t ruin the story, I just found it a little unbelievable. That being said, it didn’t ruin the book for me or keep me from wanting to read the next book in the series.

Jake Becker is a hot-shot Washington D.C. defense lawyer on his way to making partner. His cold demeanor helps him win cases. It also helps deter women that think he could be more than a one-night stand.

Jake’s not interested in having a wife or family. Having a girlfriend isn’t even on his radar. He’s content with a revolving door of women and his busy work life. Or so he thinks until Chelsea McQuaid and her seven nieces and nephews bump into his life.

All of a sudden, Jake finds himself involved in the McQuaid’s family life. If he’s not saving one kid from trouble, he’s taking one to a class. And it’s all worth it to see Chelsea McQuaid smile.

Sustained was so much fun to read. I absolutely adored it. I loved that the story was told from Jake’s POV. His thoughts were hilarious! I loved how cocky and sure of himself he was. I also loved the sweet side of him that wanted to help Chelsea and the rest of the McQuaid family. I would have fallen in love with him too, if I was Chelsea.

I also loved each and every one of the McQuaid kids. Emma Chase created an amazing and fun bunch of kids. I don’t think I could pick a favorite if I tried. Their interactions with Jake were so much fun to read.

This book was just so sweet! I would highly recommend it to anyone looking for a contemporary romance that will leave them in a happy mood. 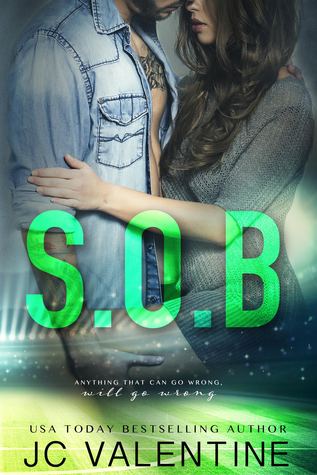 Note: **This novel is for MATURE ADULT READERS only. It contains explicit sexual content and alcohol use.**

If there’s one person Vista Marquis never wants to see again, it’s Levi Black. It’s been years since she’s seen Levi, but she still isn’t over the way he broke her heart. Vista thought they had a special connection, but all Levi wanted was to add her name to the list of notches on his bedpost.

It might have been easier to move on if Levi wasn’t a famous soccer player — and her stepbrother. Not only does Vista have to hear all about him from her mother, she gets to see and hear about him and his woman of the moment in every celebrity gossip report.

Now, in order to establish her own physical therapy business, Vista is being forced to return home to Chicago and face the one man who has broken her heart. It’s going to be her job to make sure Levi recovers from his most current soccer injury. She plans on keeping things strictly professional. All she has to do is avoid Levi’s womanizing charms.

I’m going to have to admit that I wasn’t so sure what I was going to think of S.O.B prior to reading it. I love J.C. Valentine’s writing and the creative situations she comes up with, but I was curious to see how she was going to set this one up. I had never read a step-brother/step-sister romance before. I was worried it might be too taboo, too pseudo-incestuous for my tastes.

S.O.B was neither of those two things. Levi and Vista were not blood related. They were not even raised together. They lived in the same house for a short period of time before their parents married. That was shortly before Vista left for college. Basically, they were “brother and sister” through their parents marriage alone. They didn’t even share the same last name.

Levi and Vista’s reconnection was sexy and steamy. The chemistry between these two was off the charts! Levi was just the right amount of cocky and exactly what I would expect a sports star to be. He also had a sweet softer side when it came to Vista that I adored. I loved how strong Vista was. It was really cool that J.C. Valentine didn’t let her back down from standing up to Levi. Her backbone was one of my favorite thing about her.

The book wasn’t just filled with steamy moments, though. S.O.B had a great storyline. It was a lot of fun and cute at times.There were even a few surprises that I didn’t see coming. I enjoyed watching the entire story unfold.

**I received an electronic copy of S.O.B from the author in exchange for an honest review. 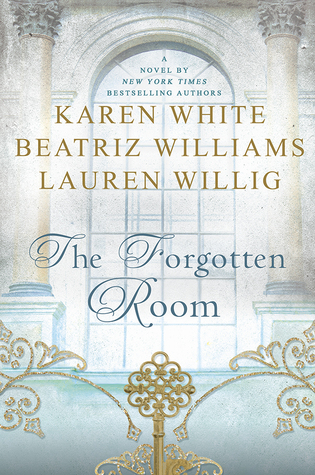 In 1945, it’s rare for women to be doctors. Dr. Kate Schuyler must dedicate her life to medicine to be taken seriously. She works in Manhattan at an old mansion that has been turned into a hospital.

When injured Captain Cooper Ravenel arrives at the hospital, Kate can’t help but be drawn to him. She feels like she’s known him forever. The feeling is intensified by a portrait in the captain’s possession. A portrait that looks very much like Kate. Not only does the woman look like Kate, she is wearing a ruby necklace exactly like the one Kate’s mother gave her.

As Kate and Cooper start to search for the truth behind the mysterious painting, they begin to uncover stories of the past. The stories involve Kate’s grandmother Olive, her mother Lucy and the wealthy Pratt family.

Karen White is one of my favorite authors. Her writing is beautiful. I love how she mixes past and present, mystery, romance and history all into one amazing story. I was very excited to read her collaboration with Beatriz Williams and Lauren Willig. I haven’t read these authors before, so I was excited to read their work in combination with an author I love.The combination of the three authors was seamless. Honestly, I couldn’t even tell the story was written by three people.

The Forgotten Room was so interesting to read. I loved the way the three different characters and time frames were woven together. It kept my attention and kept me wondering what had happened in Olive’s Gilded Age and Lucy’s Jazz Age. I wanted to know how all three women were tied together. The authors did an amazing job doling out pieces of information a little at a time to keep the story fresh and entertaining.

My favorite thing about this book was that not all of the secrets were easy to guess. Just when I would think I had something figured out, I would learn something that changed how I saw the characters.

If you’re looking for a wonderful historical romance / mystery to read, I would highly suggest The Forgotten Room.

**I received an electronic copy of The Forgotten Room from NetGalley in exchange for an honest review.