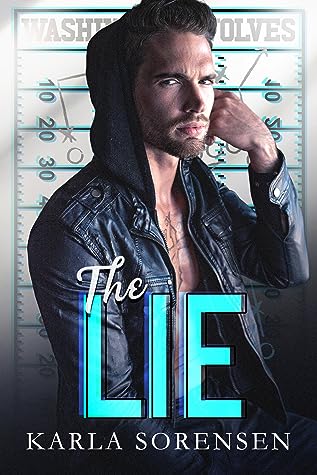 That’s why Dominic Walker is completely off my radar. Sort of.

Babysitting the team troublemaker when he’s forced to volunteer for the foundation where I work means I can’t exactly avoid him.

I wish I had though. Because once I get to know Dominic, it’s almost impossible to ignore the feelings he brings out in me.

Pretty soon, I’m breaking all my rules. I just have to hope he doesn’t break my heart in the process.

When I first started The Lie I thought, “Oh, no.” because I was not impressed with Dominic. He was a professional football player with a big chip on his shoulder. Getting to know him made the reasons for his attitude understandable, but still didn’t make him more likable. It wasn’t until he started pursuing Faith that he redeemed himself. Even then I was torn by his lie of omission. It should have been easy for him to come clean with Faith, but I got why he didn’t. Who wouldn’t want to someone to love them for who they were all the time? That being said, the hole Dominic dug for himself was deep.

I instantly loved Faith’s character. I can remember her as an adorable little girl in the Washington Wolves series, so it was fun to see her all grown up. Faith was someone most readers will see a little bit of themselves in. She some I would describe as being an average person lacking a little confidence in certain areas. I enjoyed seeing her relationship with her family and some characters from previous books. Faith had a lot going for her, and her relationship to Dominic added to her life rather than took it over.

Dominic and Faith had one of those relationships that’s magic on the page. There’s the spark, the emotional connection, and the chemistry that make for a great romance. I’m not normally a big fan of lies of omission like Dominic’s, but this romance worked for me. I loved the way the fall out was dealt with. It made their relationship stronger, and I liked knowing they could weather the tough times based on what they had built.

The Lie has me super excited for this series to continue. I cannot wait for Faith’s sister Lydia’s book.