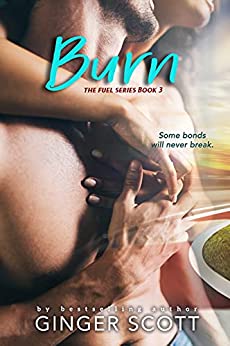 **Burn is the third and final book in the brother’s-best-friend, friends-to-lovers Fuel Series by Ginger Scott. This second-chance romance completes this angsty, steamy, new adult trilogy.

Dustin Bridge’s world is about speed. About the edge. His life has been carved by cutting corners and making moves, following impulsive decisions while weighing the facts at hand.

On the track, that has never steered him wrong.

In life, though? That’s another story.

On the cusp of greatness, the world’s up-and-coming racing star seems to be living the perfect story. A hero to his hometown. A partner to his best friend. A man poised to take the throne, to become the greatest, and to reap the rewards and attention that come along with it.

He’s been branded the track’s most eligible bachelor. And rarely does he cross a finish line without a dozen screaming, adoring women brandishing his name on glitter-covered T-shirts across their chests, just hoping he’ll break his own rules and take one of them to bed.

But he won’t. As loose as Dustin may be on the road, he’s become disciplined in life. He let love in completely—once. For one person. Hannah Judge. And she wrecked him.

And now, she’s back.

Ginger Scott didn’t pump the brakes once with in this series. Burn was just as angsty and adrenaline filled as the first two books. Hannah and Dustin were in an awkward place with each other at the start of this book based on the ending of the last one. I wasn’t exactly happy with Hannah at the beginning, even though I understood her reasoning. Dustin also felt a little weaker as a character at a pivotal moment than I wanted him to be, but I guess I won’t complain too much about that because it made things easier for me in an emotional way. Dustin and Hannah ended up exactly where they needed to be. I loved how Burn wrapped up everything and brought everyone together. It was a great ending to a fantastic romance series.