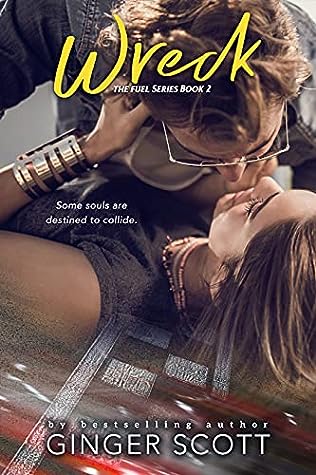 **Wreck is the second book in the brother’s-best-friend, friends-to-lovers Fuel Series by Ginger Scott.

When Dustin Bridges left Camp Verde to try to make it on his own, he left half his heart behind. A life with Hannah Judge was just too dangerous. A mountain of chaos and violence was always aiming for the target on Dustin’s back, and that made giving up the only person he ever loved feel necessary.

But impossible isn’t a word Dustin believes in. Defying odds is what he’s good at. It’s how he’s survived. And when fate calls him home, he sees it as his chance to take back his girl, to make his heart whole and to put his makeshift family back together.

Just one thing. That family? And more importantly, that girl? They want nothing to do with him.

When Dustin left Hannah without a word, he broke a promise. More than that, he broke a bond. He broke Hannah. The life she saw in her future was gone in a blink, and in its place she grew a heart of stone and a craving for danger.

But isn’t danger what Dustin Bridges is really all about?

I couldn’t wait to read Wreck after the end of Shift. I have to admit I was nervous for Dustin and Hannah. Ginger Scott put them through a lot in Shift and I wasn’t sure what that was going to mean for them in Wreck — especially since it’s the second book out of three in the series. Since Wreck is the middle book in the series, I want to review it a bit differently. Instead of my regular review type, I’m going to give you the thoughts I wrote down while in the midst of reading it. For some reason, that makes more sense to me.

First impression: I loved how Wreck started out. The vibe was slightly different than Shift. A little less angsty and also more mature. I liked that a lot. It’s been four years, but Dustin and Hannah are both still reeling from the events of that first book. He knows he messed up. She hasn’t completely let go. When life throws them back together, the sparks are still there and so is the drama. I loved how Hannah’s family was heavily involved and what that meant when it came to Hannah and Dustin. I want them together!

Half way through: Okay. Who turned up the angst??? That sense of dread I had when I was reading Shift came back full force. I’m a little worried about the tentative bond between Dustin and everyone and how Las Vegas is going to impact that. I’m scared! Especially since I already know there’s a third book coming.

Final thoughts: I am both excited for Burn and angry at the way this cliffhanger left things at the same time. I saw it coming, but somehow still didn’t expect the way things left off. I’m angry at all of the characters right now. Some more than others. All I have to say is Ginger Scott better make up for that ending… and I know she will. Wreck answered some questions, but also managed to complicate Dustin and Hannah’s story more. I loved it! Now, hurry up and get here Burn! I need my HEA.