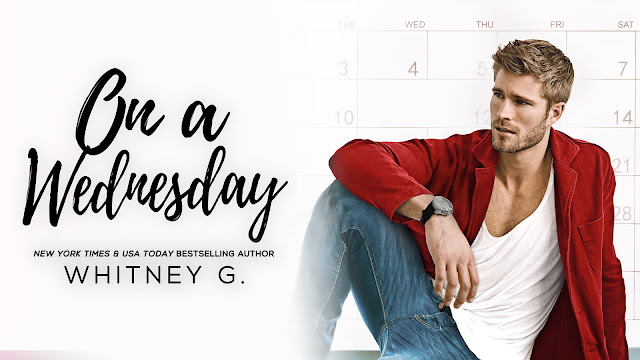 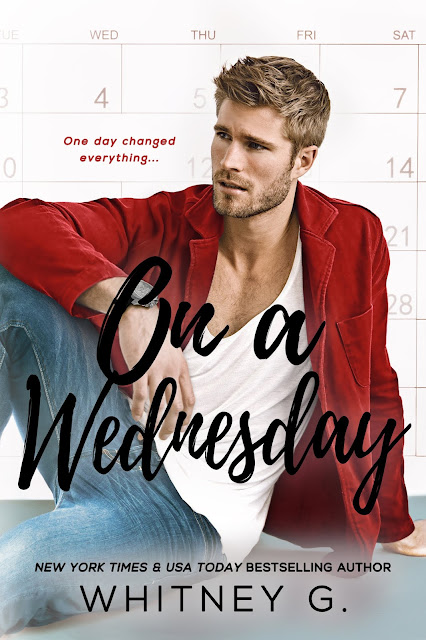 On a Wednesday
Series: One Week, #2
Author: Whitney G.
Publication Date: July 7, 2021
Genre: Contemporary Romance, Sports
Note: This review is for an ARC and is my unbiased opinion.
Rating: ★ ★ ★ ★
Synopsis:
We met on a Wednesday.
Became enemies, then lovers, on a Wednesday.
And we made a final promise before saying goodbye, on a Wednesday …
Kyle Stanton is the cockiest playboy who has ever set foot on this university’s campus.
He’s also the last person on earth that I want to interview for my senior thesis since:
1) I haven’t forgotten how he left me hanging for a group project during our freshman year. 2) He has a tendency to believe that any woman who breathes in his direction wants him. 3) Did I mention how infuriatingly cocky he is?
If I hear him utter the phrase, “No need to stare, I’ll let you ride it up close and personal, just say the word,” one more time, I will scream.
At least, those are my initial impressions until he proposes “a perfect deal” that works in our best interest. Until one filthy kiss changes everything, and he shows me a side of himself that makes me fall in love.
We only have one semester left together, though …
He’s bound for the professional football league, and I’m bound for London.
We promise to remain long-distance “friends,” but a brutal argument tears us apart, and we haven’t spoken to each other since.
Until now.
We met on a Wednesday.
Became everything, then nothing, on a Wednesday.
And now he’s shown up to my engagement party, all these years later, on a Wednesday …
On a Wednesday is a standalone inspired by Adele’s “Someone Like You.”
On a Wednesday was another fun read from Whitney G. We finally get Grayson’s (On a Tuesday) college teammate and friend Kyle’s story.

Kyle’s story is pretty entertaining. I can’t say that I immediately loved Kyle. Cocky is an understatement when it comes to his personality. It took Courtney getting to know what was underneath his attitude to like him as a character. I still would have liked to see both his and Courtney’s characters fleshed out a little more, but there was enough to get to know them well. Courtney was way easier to like. The two of them together were pretty sweet. I liked how their relationship/friendship advanced. Their movie stuff made me smile a lot.

There were a couple of things that had me considering a 3.5 star instead of 4 star rating. I had mixed feelings about the jumping back and forth between present and the past. I liked both timelines, but I’m not a big fan of flashbacks. The way the timelines were intertwined worked for me, but I might have liked it more if things happened chronologically. It would have taken some of the surprise out of the fallout, but I don’t know that I would have minded that. The other thing was that whole cocky Kyle thing I mentioned. I ended up giving this book a full 4 stars because these things didn’t bother me as much once I made it to the adorable ending. Everyone and thing came full circle and I loved that.

So, yeah. Overall, I really enjoyed On a Wednesday. It fit this series well and made me swoon at the end.

AVAILABLE ON KINDLE UNLIMITED
AMAZONUS
AMAZON UK
AMAZON CA
AMAZON AU
Connect with Whitney G
Whitney G. is a New York Times & USA Today bestselling author. Her books have been published in twelve languages. Whenever she’s not penning a new novel, you can find her blogging about self-publishing at The Indie Tea, drinking hot coffee, or traveling the world in sweater boots.
You can connect with Whitney on Instagram and Facebook.
Instagram: @whitneyg.author
Facebook: Facebook.com/AuthorWhitneyG
Website: https://www.whitneygbooks.com/
Amazon: https://amzn.to/31H72zj
Goodreads: http://bit.ly/2SeFkXm
Twitter: WhitGracia
Don’t forget to sign up for Whitney’s monthly newsletter here: http://bit.ly/1p9fEYF
Affiliate links used. If you purchase something through these links, the affiliate may get awarded a commission for that purchase at no additional cost to YOU.