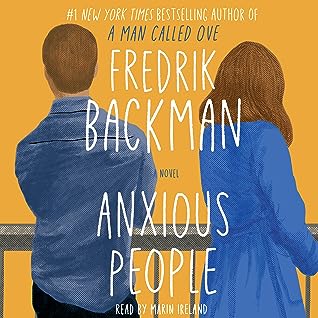 Trapped in an apartment open house with six neurotic strangers, a would-be bank robber gets much more than he bargained for in this clever, rollicking, and heartfelt novel that is one-part locked-room mystery and one-part insightful character study from the beloved, bestselling author of A Man Called Ove and Beartown.

This is a story about a hostage drama. But more than that, it’s a story about idiots. That’s why, from the very outset, I need to say that it is always very easy to declare people idiots, but only if you forget that it is also almost always idiotically difficult to be human.

When a failed bank robber escapes into an apartment filled with people during an open house, a group of six strangers are suddenly forced to get to know one another quickly and under extreme circumstances. But what will be the result?

In captivity we meet Roger and Anna-Lena, a recently retired couple who are on a manic hunt for fixer-uppers because they don’t know how to fix their own marriage. They have the distinction of shopping at every Ikea in Sweden—and those are some of the most romantic moments they ever shared. Then there is Zara, a wealthy director of a bank who has never cared for poor people or their problems (and isn’t shy about saying so). But when tragedy strikes in her life, she becomes addicted to visiting real-estate open houses to see how the middle-classes live—and possibly to find a suitable place to commit suicide. Julia and Danijela are a young lesbian couple with a newborn baby who can’t agree on anything. Their opposite and idiosyncratic home preferences are making them increasingly anxious about their chances of spending a lifetime together. And Estelle, an eighty-year-old woman who has lived long enough to be unimpressed by some bank robber waving a gun in her face. Despite the story she tells them all, Estelle hasn’t really come to the apartment to view it for her daughter, and her husband really isn’t outside parking the car.

As police surround the premises and television channels are broadcasting live, the pressure of an increasingly tense situation mounts, causing each person to reveal more and more about themselves to each other. Before long, the robber must decide which is the more terrifying prospect: going out to face the police, or staying in the apartment with this group of impossible people.

A riotous comedy, Anxious People is about a crime that never took place, a would-be bank robber who disappears into thin air, and a group of very anxious people who experience exactly the same events in wildly different ways.

I’m a fairly new Fredrik Backman reader. I read and ended up loving Beartown, but to be honest it took me a long time to get into it. It started so slow for me. That was not the case with Anxious People. Where Beartown was dreary and took a lot of time to build up to action, Anxious People took off at an addicting pace. I loved the way the story was set up. I couldn’t wait to find out how everything unraveled. Learning about the characters along the way was like a cherry on top of a sundae.  I loved how their personal stories wove into the bigger picture. I appreciated how this book managed to be incredibly funny while delivering some very strong punches. So many things hit me right in the heart. I loved every minute of it. Anxious People will be going on my list of favorite books I’ve read this year.

Since I listened to this book, I want to comment on the narration as well. It was spectacular. I got both the audiobook and e-book from my library at the same time. I thought about switching from the audiobook to the e-book just so I could read the book faster than listen, but I liked the narrator too much. Marin Ireland brought the story to life in the best way.  Her narration was so good that I had to listen and sent the e-book back for someone else to read.