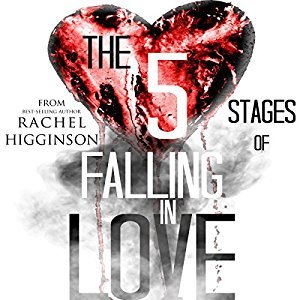 The Five Stages of Falling in Love is a Contemporary Romance.
Elizabeth Carlson is living in the pits of hell- also known as grief.

Her husband of eight years, the father of her four children and the love of her life, died from cancer. Grady’s prognosis was grim, even from the start, but Liz never gave up hope he would survive. How could she, when he was everything to her?

Six months later, she is trying to pick up the pieces of her shattered life and get the kids to school on time. Both seem impossible. Everything seems impossible these days.

When Ben Tyler moves in next door, she is drowning in sorrow and pain, her children are acting out, and the house is falling apart. She has no time for curious new friends or unwanted help, but Ben gives her both. And he doesn’t just want to help her with yard work or cleaning the gutters. Ben wants more from Liz. More than she’s capable of ever giving again.

As Liz mourns her dead husband and works her way through the five stages of grief, she finds there’s more of her heart to give than she thought possible. And as new love takes hold, she peels away the guilt and heartache, and discovers there’s more to life than death.

The Five Stages of Love has been on my TBR since it was released. I’m not sure why it’s taken me so long to get to it. I’m seriously regretting that now. This book was heartbreakingly good.

Liz is has lost her husband and the father of her four young children. She’s simply trying to make it through the day when Ben moves in next door. As Liz moves through the stages of grief of Grady, she begins to develop a friendship with Ben. As their friendship morphs into more, Liz has to navigate her feelings over losing Grady and what it means to fall for Ben.

Like I said before, this book was heartbreakingly good. Liz’s grief was overwhelming at times, as it should have been. Listening to her navigate her understandable feelings was hard, but it was also rewarding. The way she worked through things and picked up the pieces of her life was inspiring. It might have taken time, but also felt natural. I loved how her feelings grew organically for Ben. I adored how Ben accepted Liz for who she was at any given moment, and also how he bonded with her children. The only thing I could have wanted from this book that wasn’t included was Ben’s point of view. I don’t blame Higginson for not including it, though. It might have distracted from the growth of Liz’s character.

The Five Stages of Falling in Love was a very beautiful story of grief and love. It broke my heart several times, but also put it back together. It touched me in ways I wasn’t expecting. I would highly recommend it. It is now my favorite Higginson book.

17 thoughts on “Audiobook Review: The Five Stages of Falling in Love (Rachel Higginson)”