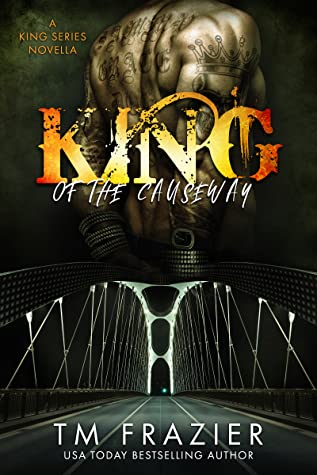 A massive hurricane looms off the coast of Florida while a different kind of storm is brewing in Logan’s beach.
A mysterious newcomer is vying for the title of King of the Causeway. He’ll do anything to steal the crown, including bringing someone back from King’s past who will threaten a lot more than the title King has spent his lifetime earning.
A hurricane is coming.
And it could destroy everything.
(This novella features King & Ray from King & Tyrant)

King of the Causeway was a fun return to the King series. I loved being back in King and Ray’s relationship. It was also fun to get glimpses of other beloved characters from this series. I do wish it would have been a full length novel because there was a lot going on that could have had more attention placed on it and some things happened so quickly it was almost unbelievable, but overall it didn’t really matter. This was still a good addition to the series.

Note: King of the Causeway MUST be read after the first 9 books in this series or you WILL be spoiled. Each series within this series has some great revelations that you wouldn’t want to miss out on.

8 thoughts on “Mini Review: King of the Causeway (T.M. Frazier)”