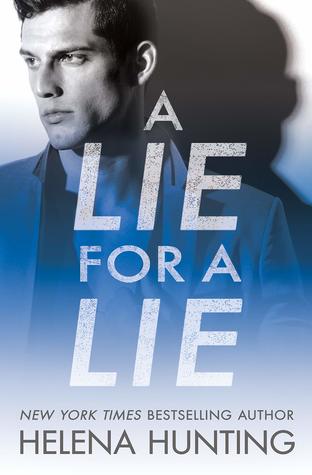 A Lie for a Lie
Series: All In, #1
Author: Helena Hunting
Publication Date: October 15, 2019
Publisher: Montlake Romance
Genre: Contemporary Romance, Sports
Note: This review is for an ARC and is my unbiased opinion.

Sometimes I need an escape from the demands, the puck bunnies, and the notoriety that come with being an NHL team captain. I just want to be a normal guy for a few weeks. So when I leave Chicago for some peace and quiet, the last thing I expect is for a gorgeous woman to literally fall into my lap on a flight to Alaska. Even better, she has absolutely no idea who I am.

Lainey is the perfect escape from my life. My plan for seclusion becomes a monthlong sex fest punctuated with domestic bliss. But it ends just as abruptly as it began. When I’m called away on a family emergency, I realize too late that I have no way to contact Lainey.

A year later, a chance encounter throws Lainey and me together again. But I still have a lie hanging over my head, and Lainey’s keeping secrets of her own. With more than lust at stake, the truth may be our game changer.

A new hockey romance from Helena Hunting? Yes, please! I didn’t even need to read the blurb to know I wanted to give it a read.

I loved how A Lie for a Lie started out in the present day. It brought me right back into the hockey world that Pucked started off. (Yes, you read that right. All In is a spin-off of the Pucked series.) There were cameos and a bunch of fun stuff.

With the next chapter, I was taken back in time to the start of Lainey and RJ’s romance. This was actually my favorite part of the whole book. It was set in Alaska and had some really great funny stuff. I loved all of Lainey and RJ’s interactions. Lainey was so awkward and RJ’s steadiness balanced that out. It was just so cute and fun.

That fun had to end and the characters had to return to their day-to-day realities. Things switch back to the present and this is where things got interesting for me. I could see where the story was headed and I couldn’t decide whether I liked that or not. There were some great things about it. RJ showed what he was made of and I ended up liking his character even more than I did before — which I loved him so that says a lot. Lainey, though… I’m not sure I liked the slight change in her character. What was once almost humorous about her awkwardness almost became just plain weird. I felt like she lost some of her cuteness.

That being said, I still loved the dynamics between Lainey and RJ. I liked how their relationship evolved. There were some great surprises and laughs in store. I also loved her parents. They couldn’t have been better written. Same with RJ’s sister. Plus, all the regulars from the Pucked series had some fun cameos.

A Lie for a Lie was a cute read and a fun way to start this new hockey series. I’m really interested in finding out what’s next in the series. I think it’s going to be a crazy ride like the Pucked series.

Author Biography
New York Times and USA Today bestselling author Helena Hunting lives on the outskirts of Toronto with her incredibly tolerant family and two moderately intolerant cats. Helena writes everything from contemporary romance with all the feels to romantic comedies that will have you laughing until you cry.
Social Media Links
Website: https://helenahunting.com/
Facebook:  https://www.facebook.com/helena.hunting69/
Twitter: https://twitter.com/helenahunting
Goodreads: https://www.goodreads.com/author/show/7226675.Helena_Hunting
Rafflecopter Giveaway
http://www.rafflecopter.com/rafl/display/07c2363f248

18 thoughts on “Review: A Lie for a Lie (Helena Hunting)”