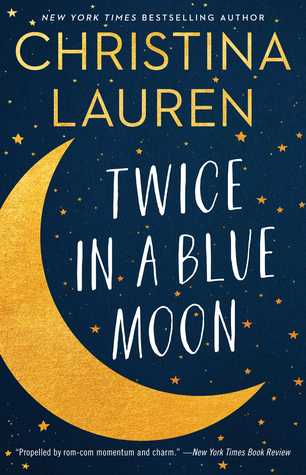 Twice in a Blue Moon
Author: Christina Lauren
Publication Date: October 22, 2019
Publisher: Gallery Books
Genre: Contemporary Romance
Note: This review is for an ARC and is my unbiased opinion.

From the New York Times bestselling author of The Unhoneymooners and the “delectable, moving” (Entertainment Weekly) My Favorite Half-Night Stand comes a modern love story about what happens when your first love reenters your life when you least expect it…

Sam Brandis was Tate Jones’s first: Her first love. Her first everything. Including her first heartbreak.

During a whirlwind two-week vacation abroad, Sam and Tate fell for each other in only the way that first loves do: sharing all of their hopes, dreams, and deepest secrets along the way. Sam was the first, and only, person that Tate—the long-lost daughter of one of the world’s biggest film stars—ever revealed her identity to. So when it became clear her trust was misplaced, her world shattered for good.

Fourteen years later, Tate, now an up-and-coming actress, only thinks about her first love every once in a blue moon. When she steps onto the set of her first big break, he’s the last person she expects to see. Yet here Sam is, the same charming, confident man she knew, but even more alluring than she remembered. Forced to confront the man who betrayed her, Tate must ask herself if it’s possible to do the wrong thing for the right reason… and whether “once in a lifetime” can come around twice.

Twice in a Blue Moon is one of Christina Lauren’s books that is on the emotional rather than humorous side of things. I appreciate how they are able to write both types of books well. I have to admit that Twice in a Blue Moon wasn’t my favorite of their books. I had some mixed feelings about it despite loving their writing.

This book basically had two parts. The first was in the past. Tate and Sam meet in London and quickly fall in love. I was thankful that Christina Lauren decided to give us this time all at once and not in flashbacks. It was nice to see how Tate and Sam’s romance started back then and how everything fell apart because of Sam’s actions. I didn’t completely connect to their relationship at this point in the story because it was two young adults falling in love almost instantly and I had a hard time believing that. I did like how it set up for the future, though.

The second part of this book was set in present day, approximately 14 years later. Tate is now a famous actress. She runs into Sam on the set of her film unexpectedly. It’s not a happy reunion because of Sam’s betrayal, but Tate at least will get some answers. This was my favorite part of the story. I liked how Tate had to navigate the her truths and decide what she wanted to believe when it came to the past and things going on in the present.

Where Twice in a Blue Moon lost me was the pace of the story. The first two weeks felt long because of the detail of them. The present felt like it flew by because of the way time jumped and how quickly the characters moved. It felt like things ended abruptly and there wasn’t a clear resolution. I still enjoyed this book despite that, but I think I could have loved it with a little more attention to the end.

15 thoughts on “Review: Twice in a Blue Moon (Christina Lauren)”