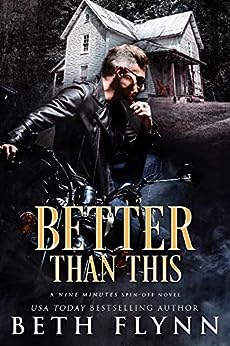 Time doesn’t heal all wounds. Sometimes they just scab over.

Haunted by memories of a failed marriage, trauma surgeon Barbie Anderson escapes to her hometown for a fresh start. But the quaint community of Pumpkin Rest has memories and failures of its own that should stay buried.

When Barbie runs into ex-con biker Jake Chambers, he stirs up anger and resentment in her that she doesn’t want to face. He reminds her of the one man she’s never gotten over and dredges up decades-old heartache. With his rugged criminal exterior and gentlemanly demeanor, the silver fox may have the other women in Pumpkin Rest falling at his feet, but not Barbie.

She refuses to let her guard down and have her heart broken again. When a series of revelations come tumbling forth, Barbie is forced to confront her past and trust Pumpkin Rest’s most sought-after bachelor where she’ll soon learn that love wears many faces.

Will secrets from the past destroy their future or will old wounds finally heal, allowing her to love again?

Before I begin my review of Better Than This, I feel the need to point people in the right direction if they are not familiar with Beth Flynn’s writing. Beth Flynn has an insanely good dark romance / psychological thriller trilogy called Nine Minutes. It’s really the place you need to start when reading her books. Every book that comes after the original Nine Minutes has been slowly revealing itself since then. Better Than This doesn’t exactly continue storylines from the original trilogy, but there are some surprise references to people and events from it that build to make this book what it is. I highly recommend starting with Nine Minutes and reading Ms. Flynn’s books in the order they were released. If you’re interested in my review for the first book, you can find it here. Now for my review…

Better Than This had a slightly different feel than Beth Flynn’s other novels. This one didn’t jump around in time as much. There were a few scenes that took us to the past, but the majority of the book was in the present and focused on Barbie and Jake’s romance. Barbie and Jake’s romance differed from others in this series because it was a more mature romance. The characters are in their 50’s. It’s not very often I come across a romance with characters this age that feels fresh and not antiquated. The characters had moments where they felt the things you feel when you grow older, but they also had a youthfulness to their thoughts. Getting older myself, I liked this because you still feel like you’re young at heart even when your body isn’t. Barbie and Jake’s romance was also more of a slow burn than the other novels in this series. Given their age, that was surprising. I liked the reasoning behind it.

Now that I’ve said Better Than This was mostly romance based, I need to backtrack a little on that statement. If you have read Beth Flynn’s books, you know that it’s not all about the romance. I probably shouldn’t have said it was. There’s always a gigantic mystery to unravel. That’s another thing that made this book (and all of her others) so special. I was constantly playing detective. Each little hint had me thinking back to things that had been said or done. Usually it just left me with more questions than answers, but it was so much fun and kept me glued to this book.

When I started reading Better Than This I was very curious to find out how Barbie and Jake tied into the original Nine Minutes Trilogy. They weren’t characters I remembered, but there are so many characters I could have easily forgotten them. I kept waiting for some clue to connect them. In true Beth Flynn fashion, things took a while to come together. That’s what’s so amazing about her writing, though. Every little twist, turn, and revelation gives you some new piece of information to fit together. The result is a fabulous puzzle and a huge pay off. I definitely got one of those with this book. Some of my lingering questions from previous books were answered and it was utterly satisfying. There are still more questions now, but I’m hoping Beth Flynn will keep the spin-offs coming and the next book will answer them.

19 thoughts on “*Spoiler Free* Review: Better Than This (Beth Flynn)”