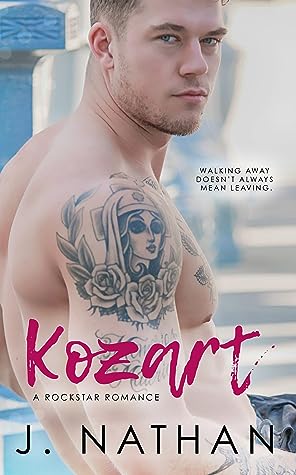 Kozart Savage is the world’s biggest rock star.
At twenty-five, he’s got it all. Money. Fame. And the adoration of fans everywhere.
He thought that was enough to make him forget his past.
Enough to transform his distrusting heart.
Turns out that’s not how it works…
Then he meets a bridesmaid hiding out in a hotel bar.
Probably the only girl on the planet who doesn’t know who he is.
But she seems to be the one girl who can give him something no one else can.

Aubrey Prescott just discovered her boyfriend cheating—at her sister’s wedding.
Trying to escape humiliation, she seeks refuge in a hotel bar.
While trying to figure out how to pick up the pieces of what was supposed to be an amazing senior year in college, a handsome stranger interrupts her wallowing.
A stranger who quickly makes her forget why she’s there.
One who, after an unforgettable night, disappears without a second glance.

But walking away doesn’t always mean letting someone go.

Rock star romances aren’t always my favorite, but I knew I had to read Kozart for a couple of reasons. One, I love J. Nathan’s writing and new adult romances. Two, there was something about Aubrey meeting Kozart in a hotel bar after finding her boyfriend cheating on her that caught my interest. I think it was partly that she didn’t know who he was. The entire scenario sounded fun. It was, too.

Aubrey and Kozart had a fun chemistry. I loved how they met and the instant connection they had. Things moved a little slowly between them at first and they way their relationship progressed was perfect. They truly got to know each other. I loved the secrets they shared and the excitement of their romance. It didn’t feel like the typical rock star romance other than the very start. It was a sweeter story.

The only thing I could possibly complain about was that the plot twist was slightly predictable. That didn’t bother me, though. I liked being able to figure things out ahead of time because it took some of the angst out of the situation for me. It was had just enough angst to feel believable, but also left me feeling happy.

That’s what this book really did. It made me incredibly happy. I loved every minute of reading Kozart. It’s definitely one of my favorite rock star romances now.