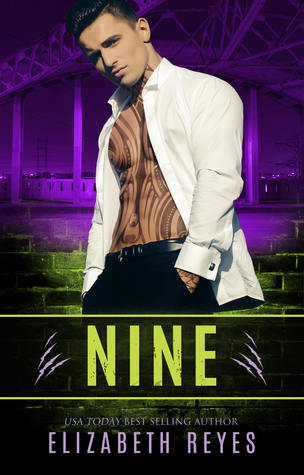 After years of gravitating to douchebag players with no more to offer than a wildly good time and zero promises, single mom Drew has graduated to dating a real man. He’s the responsible, mature kind—willing and able. To offer her and her daughter a real future.

Then along comes Nine.

More like a ten, is her first thought when introduced to the tatted-up, foul-mouthed, unapologetic player. The guy might’ve been her kryptonite five years ago.

But she has a child to think about now.

With every new encounter she has with Nine, she begins to realize there’s so much more to him than just good looks and his bad boy image. She sees a vulnerability in him she never expected. Worse yet, he’s sending out vibes that whisper of promises he’s never made to any girl before.

Is she willing to trade in Mr. Perfect for someone who’s one impetuous decision away from proving that her first impression may have been heartbreakingly spot on?

After having spent a little bit of time with Nine and Drew in Beast, I was excited to read their book. Nine was everything I was expecting it to be. It was classic Elizabeth Reyes. It had her signature alpha male and strong female with a plot that kept me reading.

Nine was the typical single man who wasn’t looking for commitment…until he met Drew. She was his game changer. He didn’t know how to show her he was willing to change his ways for her, but Nine was going to do everything he could to convince her. I loved what softie he was under his tough exterior.

Drew was a woman whose heart and mind were at war. She thought she knew what she needed and wanted, but Nine threw a wrench in her plans. I loved her relationship with her daughter and her ex. It was so sweet. I also loved how her attraction to Nine questioned her beliefs.

Nine and Drew’s journey to love wasn’t simple. It was filled with real life situations and problems. I really enjoyed how their story unraveled. If you’re a fan of the Boyle Heights series, you’re going to love seeing Nine and Drew give in to their temptations.

One thought on “Review: Nine by Elizabeth Reyes”