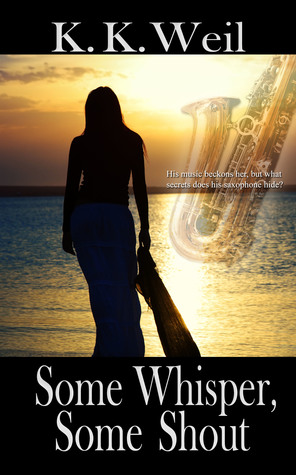 Some Whisper, Some Shout
Author: K.K. Weil
Publication Date: August 16, 2017
Publisher: The Wild Rose Press
Genre: Romance, Suspense, Contemporary
Note: I received an ARC from the author in exchange for an unbiased review.

Devices. Jolie’s got tons of them. Coping mechanisms that ensure she’s not falling victim to the mental illness that’s taken hold of both her brother and father. Helping the homeless gives Jolie much needed consistency. But when a stranger struts into her Jersey Shore creperie, writing cryptic songs on napkins and then disappearing, her world becomes anything but routine.

Reed can play the soul out of his saxophone, but he’s hiding something. Why else would he reveal so little about himself, or plan one secluded, albeit eccentric, date after another? And what’s in that backpack he carries everywhere? Then again, with her distressed brother missing, an estranged mother returning home, and a feisty grandmother acting weirder than usual, Jolie can’t decipher whether her suspicions are valid or dangerous delusions.

When inexplicable slashings of the homeless occur in her otherwise safe town, Jolie’s devices begin to fail.

Some Whisper, Some Shout is the second book I’ve read by K.K. Weil. I enjoy her writing and the mysterious stories she comes up with. I do have to admit that I didn’t like this book as much as the other book I’ve read by Weil. It was good, but there were a couple of things that kept me from falling in love with it.

To be honest, I didn’t connect with Jolie’s character. I didn’t like her. She was immature and self-centered when it came to her friends and family. Jolie couldn’t see past her own needs or the rules she gave herself. That was weird considering how self-less she was when it came to her homeless charity endeavors and her brother, Tristan. It was frustrating reading the story from her point of view. I hated the choices she made.

Reed was a more enjoyable character. I loved when the story switched over to his point of view. I liked that Reed had flaws. He was trying to become a better version of himself, even if he did mislead Jolie at times. His character was easier to relate to.

I hate that this sounds so negative. Some Whisper, Some Shout actually had a lot of great things going on. The writing was good and the story moved at a quick pace. I loved all of the social aspects that were included. The spotlight on both homelessness and mental illness was awesome. I think I would have loved it had I loved Jolie.

Overall, Some Whisper, Some Shout was a good read. I have a feeling other readers are really going to enjoy it, especially those who like romantic suspense novels. I wish I would have connected better with Jolie and enjoyed it more myself.