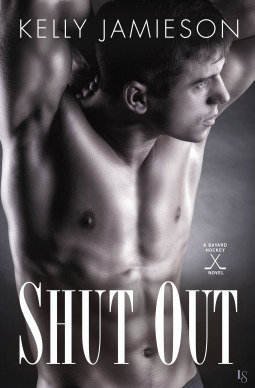 The Bayard College hockey team isn’t where Jacob Flass thought he’d be a season ago. He was a rising star in the Canadian major junior league, cruising toward a spot on an NHL roster—until a single disastrous night on the town brought it all crashing down. Now he’s out of options, except for playing well, studying hard, and staying away from girls. He’s not supposed to be flirting with the hottest, sweetest chick he’s ever met. But how could he possibly stay away?

Skylar Lynwood knows that Jacob is out of her league. She’s just trying to go with the flow, which isn’t easy when six feet and four inches of total hockey hunkiness is making a play for her one moment, then giving her the cold shoulder the next. Skylar’s head tells her that this rugged athlete isn’t worth her time, but her body says something altogether different. Risking her heart for Jacob may be the craziest thing she’s ever done . . . but she won’t let him shut her out.

I’ve read quite a few Kelly Jamieson novels over the past year, and the Bayard Hockey series has been my favorite of hers. I love how she uses first person narrative in this series. It makes it so much easier to connect to her characters. I read the second book prior to its release and really enjoyed it, so the minute I saw the first book was on sale I had to buy it.

I knew what Shut Out was going to be about prior to reading it because the second book builds upon it a little bit. It didn’t dampen my reading experience at all. I loved Shut Out. The characters were awesome, and easy to relate to. I loved that the author used them to explore the issue of sexual consent. Both Skylar and Jacob had a history dealing with lack of consent, and I loved how their experiences were different, but both relevant.

My favorite thing about Shut Out was Skylar and Jacob’s relationship. It started out as a fake relationship, but quickly moved into the real category. That wasn’t hard to believe because they had great chemistry. What made their chemistry so good was the friendship they built. They cared deeply about each other, and they were both constantly finding ways to build the other person up. It was little things like helping each other study, pushing them in the right direction on a decision, or just complimenting each other that made this romance shine. Their relationship always felt like a positive one, even when things weren’t going so well.

Shut Out was a quick, fun read. It’s a book I would recommend to readers who love new adult hockey romances. It has a swoon worthy romance and exciting hockey moments. Oh, and hot hockey guys to drool over. I can’t forget those!

3 thoughts on “Review: Shut Out by Kelly Jamieson”