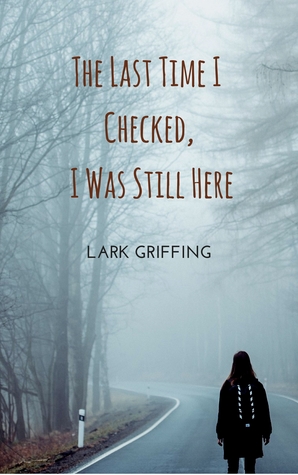 Amy’s day was starting off just great.  Ronnie was already giving her grief, she’d had an embarrassing wardrobe malfunction, and it was only first period.  Sitting in class fuming, while the word skank filled her head, Amy made a choice. From now on, things were going to be different. Amy was done — done with it all, her school, her endlessly grieving dad, and the always annoying Ronnie and her bevy of friends.

Amy’s decision to take off may not have been her finest moment, but she had to save her sanity.  Her grief-stricken father wasn’t going to help in that department.  Escaping to her childhood sanctuary was Amy’s only hope to save herself and heal.

Irresistibly engaging, The Last Time I Checked, I Was Still Here, is a journey of heartbreak, hope, and adventure that will leave you wanting more.

The Last Time I Checked, I Was Still Here is Lark Griffing’s début novel. It’s a young adult coming of age journey. Amy, harassed by classmates and emotionally abandoned by her father, sets out to her maternal grandmother’s house. Her grandmother’s house was her happy place growing up, and Amy hopes spending time there will help her find what she needs.

The majority of The Last Time I Checked, I Was Still Here was written in Amy’s perspective. She was a young woman struggling with the loss of her mother, being constantly uprooted to new towns by a grieving father, and finding herself under constant ridicule by the mean girls of her newest school. Amy was unhappy, and she sought out her happy place to find solace. What she found at her grandmother’s house was a link to her mother, and a way to discover more about herself. I admired her strength and willingness to try something new, liking hiking.

Smaller sections of the book were told in Dan’s perspective. He was a young man who was trying to make decisions for the next phase of his life. Dan was very into hiking, and much of his point of view were his hiking journeys with his friend. I have to admit that Dan’s chapters threw me off at first. They were linked loosely to some of Amy’s through the sport of hiking, but it wasn’t until almost the very end that Amy and Dan’s connection became apparent.

That leads into my biggest issue with this book. The majority of the book passed by at a very slow pace. There was way too much set up for me. Nothing very exciting happened until almost 80% into the book. There were tons of details about Amy learning about hiking, but not a whole lot of action. I wasn’t really invested in the story until that 80% mark. And then, the wrap up at the end flew by too quickly for me. I think the story would have worked better for me had the big event happened toward the beginning or middle of the book, and had more time spent on the connections between the characters after. I felt like I missed a bunch of healing and friendships developing at the end.

The Last Time I Checked, I Was Still Here was a strong début novel. I found the writing to be good, and the third person narration flowed well. It’s a book anyone interested in hiking or adventures in the great outdoors would appreciate.

7 thoughts on “Review: The Last Time I Checked, I Was Still Here by Lark Griffing”