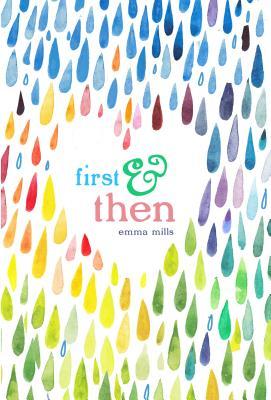 Devon Tennyson wouldn’t change a thing. She’s happy watching Friday night games from the bleachers, silently crushing on best friend Cas, and blissfully ignoring the future after high school. But the universe has other plans. It delivers Devon’s cousin Foster, an unrepentant social outlier with a surprising talent for football, and the obnoxiously superior and maddeningly attractive star running back, Ezra, right where she doesn’t want them – first into her P.E. class and then into every other aspect of her life.

First & Then came out almost two years ago. What took me so long to read it? I don’t have a good answer, but evidently finding it for sale on Book Outlet was what finally made it happen. That’s sad because First & Then is such a great book. I loved every minute of this adorable coming of age story.

Devon is a character that just about any teenager can relate to. First, she’s got the whole avoiding the future thing down to a science. The future’s scary to think about until you can actually picture it. Second, who hasn’t crushed on a friend of the opposite sex? We always think we’re good at hiding it, but it’s never the case. Poor Devon’s crush on Cas was pretty classic. Third, who doesn’t have a relationship with their sibling where one moment they’re completely embarrassed by them and the next their standing up for them? I loved how of Devon I could see in my past self. She was such a fun main character.

Devon wasn’t the only remarkable character in First & Then. Every character was special. That’s one of the things I love most about Emma Mills’ novels. She makes the side characters shine. They all have so much personality and stand out. They become as important to the reader as the main character. My favorite Emma Mills’ character will always be Frank Sanger from This Adventure Ends, but Jordan and Foster from this book are both close runners-up. Jordan because he kind of had a Frank Sanger thing going on, and Foster because he was one of the good guys. I was going to stop there, but I can’t leave out Ezra. I loved that guy and his quiet persona.

Everything about First & Then made me happy. It was one of those YA coming of age stories that’s perfect for when you need a little sunshine in your life. I absolutely adored it and highly recommend it. It would be the perfect summer read.

4 thoughts on “Review: First & Then by Emma Mills”