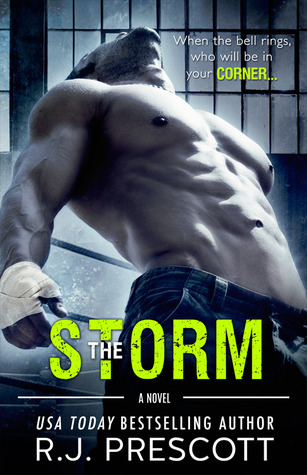 Marie Kelly is a survivor who doesn’t know when to quit. Against all odds, she’s living a life she never dreamed she could have. It was enough… until a stubborn boxer makes her want more.

Irish charmer Kieran Doherty has been a fighter at Driscoll’s Gym for most of his life. He’s been content to let his best friend take the spotlight, now it’s his turn to make a name for himself in the world of heavy weight champions. Falling in love is the one thing he vowed never to do, but meeting Marie changed everything.

It’s easy to imagine a happy-ever-after when the sun is shining. But when the storm comes, and all hope seems lost, they both learn that if you want something badly enough, you have to be willing to fight for it.

The Storm is a full length boxing romance with a happily ever after, no cliffhanger and no cheating. Mature content means that it is intended for readers aged 18+

I cannot believe that I did not know The Storm was going to be released last week! I am so ashamed of myself! I absolutely loved The Hurricane series by R.J. Prescott, and I’ve been waiting for her to release the next book. I needed to get to know more of the Driscoll boys better. I am so happy the boys are back in The Storm! It’s been too long since I’ve been graced with their presence.

The Storm features Con’s (“The Hurricane”) best friend, Kieran. Kieran gets his chance at a boxing title and love in this book. Unfortunately for Kieran, his sights are set on Marie. Marie isn’t exactly eager to jump into a relationship with the hot boxer. Her past dictates her future, and Marie knows love isn’t in the cards for her. Kieran isn’t one to give up easily, though. He’s determined to make Marie change her mind.

R.J. Prescott included a little bit of everything in The Storm. It could have easily been overly angst filled, but she included just the right amount of wit to make this love story fun. There was also actual boxing in the story. I know a lot of romance novels are labeled sports romances without any mention of the actual sport being played. The Storm gave a look at what it’s like to be in the ring, or watching the one you love in it.

I loved, loved, loved being back in the world of Driscoll’s. I was immediately pulled back into the camaraderie and friendships of the boxers. I also adored seeing all of my favorite characters again. I was so happy that this was Kieran’s story. He’s always been one of my favorite characters of the series, and I was so excited for him to fall for someone as sweet as Marie. Kieran was everything I hoped he would be. He was a big, alpha male with a super sweet side. Marie was sweet, but wasn’t one to be taken advantage of. There was a lot of strength in her tiny frame.

Kieran and Marie were perfect together. Their personalities perfectly balanced each other. They had a connection that was so primal and intense. As sweet as their love for each was, their story was a complicated one filled with health issues, crazy exes and many surprises. Kieran and Marie had a lot to overcome, and their journey to happily ever after was so worth it.

Obviously, I absolutely adored The Storm. I had so much fun reading it that I didn’t even put it down. My only regret about reading it in one sitting is that now I have to wait for the next book. I really, really want Tommy’s story!

My reviews for the rest of The Hurricane series: