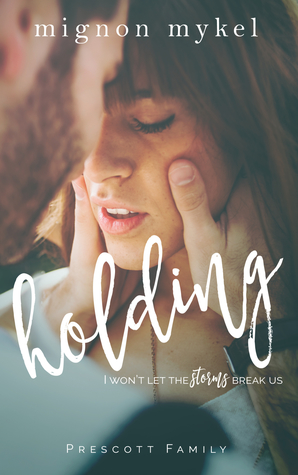 Sometimes holding on, impedes moving on.

First comes love, then comes marriage…
But before the ceremony could start, Porter’s world was knocked off it’s axis.
He fought for years to break down Asher’s walls, to see past her ghosts…but some ghosts may be too hard to fight.

Asher knew better than to believe she could keep her past in the past,
Keep the filth of who she was, from touching the Prescott family.
But as badly as she wants to keep Porter away
…she needs his family more.

What you see is what you get…
And even the most astute eyes can’t see the biggest ghost.

But sometimes holding on is the only choice you have.

Note: This is book two in a duet. Book one, Altercation, MUST be read prior to Holding.

Before I begin my review, I’m going to give you a little bit of background on the Playmaker Duet. It’s a duet, but it really contains four books. The first two books are prequel novellas. Trouble Maker is the first novella that introduces us to Porter. Asher’s novella is Breakaway. Both novellas provide information on Porter and Asher’s pasts and set up their introduction. The first book in the series, Altercation, is the beginning of their love story. Holding is second book and the conclusion of Asher and Porter’s romance. If you’re interested in reading the duet, you really need to read the first two novellas. The duet is also part of a larger series called Prescott Family. You don’t have to read the books in that series to read the duet, but they’re great books as well. Now, onto my review.

After finishing the first book in the Playmaker Duet I could not wait to read Holding. The cliffhanger at the end of Altercation shook me. I was on edge wondering what was next for Porter and Asher. I knew it was going to be a rough ride towards happily ever after for them, but I had no idea how much this book would break me.

Holding was absolutely heartbreaking. No character was left untouched. I felt horrible for both Asher and Porter. Their world was rocked in ways that destroyed them. I could empathize with both of them. Asher was struggling to accept what happened. Porter was trying to hold on to the life they had before. Their struggle felt so real and raw. I hated their moments of pain, but they made for a beautiful story of healing. And that’s what Holding was. It was a story of overcoming the past, accepting what was, and moving on. It was a story of letting go and trusting in love.

I loved every moment of Holding and all of the other books in the Playmaker Duet. I highly recommend reading them all. Mignon Mykel has quickly become one of the authors I’m waiting on new releases from. I love her writing style and the characters she creates. Her books make me feel so many things. I cannot wait to see what she has in store for the next Prescott family member.

You can find my reviews for the rest of the Playmaker Duet here: