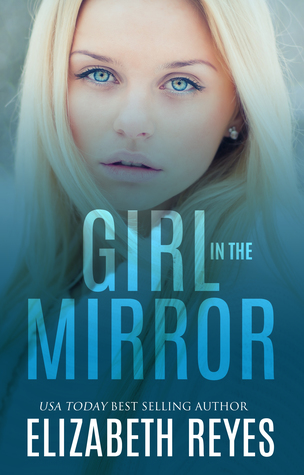 A girl without a past.

Margaret Hellman wakes in a hospital with no memory of the horrific accident that claimed the lives of her sister and their best friend.

After years of struggling to regain a fraction of her memories, Maggie is left with no choice but to accept her past is gone. Despite the tormenting void in her heart.

Then the triggers start.

Tiny indiscernible but profoundly emotional glimpses of her past. The day she meets him, at her sister’s graveside sets off the most explosive trigger to date. It’s so overwhelming Maggie’s convinced she’s supposed to remember—she needs to.

As the puzzling pieces of her past start to come together, it’s clear something’s amiss. But nothing can prepare her for the shocking reality of what really happened that fateful day seven years ago.

Girl in the Mirror is a psychological romantic suspense with a twist you’ll NEVER see coming!

I’ve been a fan of Elizabeth Reyes’ writing since I stumbled across her Moreno Brothers series. I love her independent women, alpha males, and the little twists she adds to her romances. I’m not a big romantic suspense fan because they aren’t always as entertaining as I want them to be. I usually avoid them, but I knew if anyone could craft a good one it would be Elizabeth Reyes.

I have to admit I was thrown off a little by the writing style of Girl in the Mirror at first. It didn’t really have the same feel to it as Reyes’ prior novels. So much of the beginning of this book is told to the reader by Maggie, the first person narrator. There wasn’t a whole lot of character interaction. It made more sense to me as the story went on, it just threw me off a bit at first. Maggie’s story did pull my in from the beginning, though. I was caught up in the mystery of her situation.

As the book went on, I was enthralled with the story. There was more to Maggie’s past than the blurb hints at. I loved trying to figure out what was going on and who was involved. Some of the answers were easier to guess than the others. Plus, as the romance and drama began to appear, that Elizabeth Reyes feel that I was talking about finally makes an appearance.

Another thing that surprised me about The Girl in the Mirror was the way the book wrapped up. I wasn’t expecting to move so quickly into where Maggie was now. I would have loved to see the period that wasn’t included. I wanted more of the romance of the story!

Girl in the Mirror was a great romantic suspense novel. It had fun twists, amazing characters, and kept me guessing. I’m really hoping some of the characters that were introduced get a book of their own.

3 thoughts on “Release Day Review: Girl in the Mirror by Elizabeth Reyes”