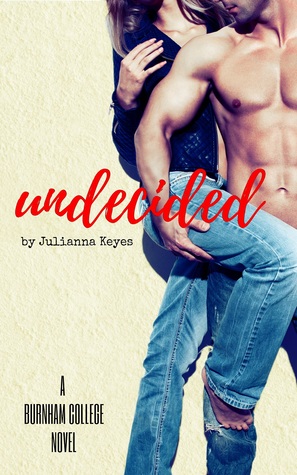 Nora Kincaid has one goal for her second year of college: be invisible. Last year’s all-party-no-study strategy resulted in three failed classes and two criminal charges, and if she messes up again she’ll lose her scholarship. But there’s one problem with her plan for invisibility, and his name is Crosbie Lucas: infamous party king, general hellraiser…and her new roommate’s best friend.

Crosbie’s reckless reputation and well-known sexcapades aren’t part of Nora’s studious new strategy, but as she’s quickly learning, her new plan is also really boring. When Crosbie’s unexpected gestures of friendship pull her head out of her books long enough to see past his cocky veneer, she’s surprised to find a flawed and funny guy beneath it all. The muscles don’t hurt, either.

But as Nora starts to fall for Crosbie, the weight of one of last year’s bad decisions grows even heavier. Because three failing grades and two misdemeanors are nothing compared to the one big secret she’s hiding…

I’ve had Undecided on my Kindle for a few months now. I don’t know why I didn’t pick it up sooner. I heard great things about it, and I wanted to read it. What finally kicked my butt in gear was the fact that I had its sequel from NetGalley to read. I’m happy this forced me to read Undecided.

I loved Undecided. The story and characters sucked me in. I could tell where the story was headed the entire time I was reading, but that didn’t make me any less interested. In fact, that made me more excited to get to the end. I had to know how everything played out.

Telling the story from Nora’s first person point of view was perfect. She was a complex character, and her thoughts and feelings gave enough insight for the story. I didn’t need Crosbie or Kellan’s view points because I could easily imagine what they were thinking. I adored Nora. I applauded her willingness to do what it took to get her life back on track.

The blurb makes you think this might be a love triangle romance, but it wasn’t really. The relationship in this one is between Nora and Crosbie. Crosbie was amazing. I loved that guy so much. While Kellan seemed like a real man whore, Crosbie seemed like a guy who tried it out and then realized he was missing something good. He was actually super sweet. I loved him with Nora.

Every character in this book added to the story. Nora, Crosbie, Kellan and all of the rest of their friends were so cool. They created drama in some very fun ways. I liked them all so much (Well, except for Nate. I don’t care for that guy.) that I hope there are books for all of them in this series!

Undecided  was well written, funny college romance. I enjoyed it, and I know other new adult fans will as well.