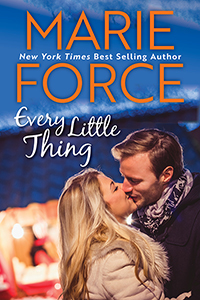 Grayson Coleman has just moved home to Butler, Vermont after spending years working for a high-powered law firm in Boston. He’s looking for a simpler, less stressful existence in the sleepy little mountain town where he grew up with his siblings and Abbott cousins. Once the holidays are over, he plans to hang out a shingle and open a new general law practice. After helping to raise his seven younger siblings, the last thing on Grayson’s mind is a family of his own.
Emma Mulvaney is enjoying a break from her reality as a busy single mother in New York City while she and her adorable daughter, Simone, spend the holidays in Vermont with Emma’s sister, Lucy, and Lucy’s future in-laws, the Abbotts. After meeting Abbott cousin Grayson Coleman and talking to him for hours, Emma is nervous and excited to have dinner alone with him after sharing her deepest, most personal secrets with him.
Will that first night be the start of something new for the jaded lawyer and the selfless single mom or will a holiday week flirtation turn into something much bigger than either of them ever expected?
Come back to Butler, Vermont for more of the charming Abbott family, their matchmaking father and grandfather and of course, Fred the Moose.

Every Little Thing is written in Force’s traditional style of dual third person narrative. Most of the story is told from Grayson and Emma’s perspectives, but there are a few chapters of returning characters’ point of views to catch the reader up on their lives. Third person is not my favorite type of narration, but Marie Force is skilled at making it work for her characters and their stories. My only teeny tiny complaint about the narration in this story is the main characters sounded more mature than I expected. The characters were younger than me, but sounded older. I couldn’t quite identify with the way they spoke. Maybe it’s an East Coast versus West Coast thing. I’m not quite sure.

Emma and Grayson’s whirlwind romance was sweet. They knew from almost the moment they met that there was something tangible between them. They acted quickly on that feeling and found an even deeper connection than they expected. Unfortunately, they had a huge hurdle in front of their possible relationship with the distance in their living arrangements. Emma and Grayson had to decide quickly if their instant connection was worth rearranging the lives they had planned for themselves.

While I found Emma and Grayson’s relationship sweet, I also found it a little too good to be true. Their instant spark felt a little forced to me. I couldn’t believe the lengths both of them were willing to go to after a week together. It wasn’t that I didn’t like them together, I just needed more time for them to truly fall for each other.

I enjoyed the updates on other Green Mountain friends and family, but I couldn’t help but wonder if those chapters took away time that could have been spent on Emma and Grayson’s developing relationship and their backstories. I love seeing them and hearing what they are up to, but there are now so many of them that I feel focus is stolen from the main characters. I would rather see these updates through the current character’s eyes — or have returning characters given another book entirely of their own.

Overall, Emma and Grayson’s romance was a fun return to Butler, Vermont. I enjoyed getting to know them and learning their stories. I know fans of the Green Mountain series will love that it’s being continued and catching up with their old friends.

4 thoughts on “Review: Every Little Thing by Marie Force”