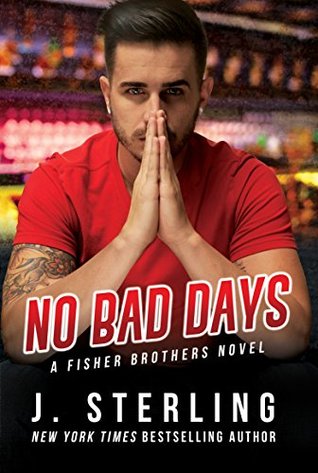 Nick Fisher is State’s most eligible bachelor—confident, creative, and driven—and is completely aware that every girl he knows is trying to land him. But Nick is more than the marketing genius everyone sees on the outside. In fact, his life is far more complicated than anyone suspects . . . even his own brothers.

Jess Michaelson knows she shouldn’t want Nick like all the other girls do, but she’s crazy about him anyway. How could anyone resist those charms? When he focuses his attention on her, she has no idea what she’s truly in for.

Sometimes love is hard.
But it’s worth the fight.

I couldn’t resist reading J. Sterling’s new release, No Bad Days, after reading the book blurb. It just sounded so fun and cute. I can confirm it was just that, with the tiniest amount of angst built-in.

What I liked about No Bad Days was the connection I felt to the characters and their relationship. It was so easy to relate to Jess. Her thoughts were mirror images of some I had in some of my earliest relationships. Those moments of feeling that she somehow attracted a guy who is way out of her league were priceless. I also related to how quickly Jess was to understand Nick and to forgive him. Her character had flaws that are abundant in young women and I appreciated that — even when I wanted to give her a bunch of not so nice advice.

Nick was a giant idiot. If he hadn’t had his own point of view, I wouldn’t have liked him at all. He could be such a jerk. Nick’s lucky I could understand his thoughts and forgive him because he did some incredibly stupid things. Nick was much sweeter than he seemed and his feelings for Jess won me over.

Nick and Jess’ (Anyone else think New Girl when I put those names together?) relationship wasn’t smooth. It had the ups and downs that most college relationships have. Nick and Jess were both finding their ways as adults and learning how to be together. It was very normal and sweet. Their interactions with each other were so cute. But this is a book, so it also had some crazy and cheesy things going on. I loved every minute of the drama. It made No Bad Days a little bit more exciting to read.

The only thing I could have done without in No Bad Days was the insta-relationship. The minute they connected with each other they DTR’d and it just didn’t feel natural. I would have liked a little more build up to couple status. A little more “are we or aren’t we a couple” would have been nice and natural.

I am so happy No Bad Days the beginning of a new series. After meeting Nick’s bar owning brothers, I am dying to learn more about them! They have such personality. I can only imagine how exciting their stories are going to be.

No Bad Days was a cute, sexy and dramatically entertaining new adult novel. It was a fun reading experience you won’t want to miss.