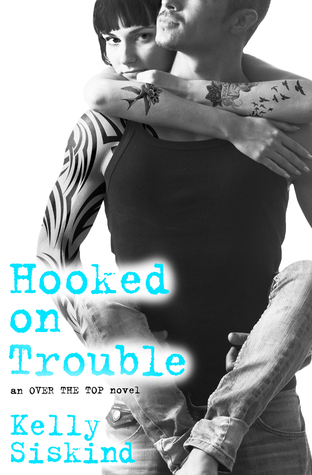 The last time Raven did “real” was sixteen months ago, when she spent one unforgettable night with the tattooed, impossible sexy Nico, and then he disappeared the next day.  Since then, she’s kept her guard up and her feelings to herself.  She doesn’t have time for relationship drama when she’s busy searching for her long lost sister.

Nico hasn’t stopped thinking about Raven—her sultry curves, inked skin, or the fact that he ditched her after their night together.  Now that they’re living in the same city, he knows this is his chance to make things right.  What better way to prove to Raven he’s for real than helping her find her sister?  But when the lines between right and wrong start to blur, putting his job on the line, Nico has to decide if the risk is worth the ultimate reward.

I’ve been waiting a long time to find out what went down between Nico and Raven in The Perfect Mistake. I knew it had to be something big based on Raven’s reaction to him in A Fine Mess. It wasn’t quite what I was expecting, but it created a multi-layered story for Hooked on Trouble.

Each book in Kelly Siskind’s Over the Top series has been different. They’ve all included her witty dialog and amazing characters, but with each new book the series has gone a little deeper and dealt with darker issues. Kelly Siskind has a way of surprising me with her characters’ stories.

Raven’s history was so much more than I expected it to be. She seemed so confident and kick ass in the previous books, but there was a vulnerability I wasn’t expecting from her. The mystery behind her missing sister brought so much depth to Raven’s story and gave such great insight to her actions and reactions.

Nico was exactly who he seemed to be in the previous two books. He was a by the book guy who tried to make the right decisions all of the time. His job as a police officer gave him an even more serious edge. He was definitely not the fun-loving one in his group of friends. Nico had more at stake and needed to be the rock for his friends and family.

Raven and Nico had amazing chemistry. They were so freaking sexy!!! I wasn’t surprised by that after seeing bits and pieces of their connection in the rest of the series. I was surprised at the depth of their emotional connection, though. They completed each other in an unexpected way. Their relationship truly brought out the best in each of them. The moments they spent together were the bright light of Hooked on Trouble.

I found it really hard to compare Hooked on Trouble against the first two Over the Top books. I gave both of those 5 stars. They had tough issues, but they also had a humorous side to them that I really loved. This one felt like it was missing its fun side. There were a few funny moments, but it otherwise felt heavier than the other books. I debated giving it 4 stars, but the more I thought about it, the more I realized what an amazing book this was. I truly enjoyed the way this story unfolded. I loved the issues it touched on. The things that connected Nico and Raven were very raw and real. It may not have had all of the laughs of the other two books, but it was definitely special and 5 star deserving read. I would highly recommend reading it.

His large hand presses against my knee under the table. “Can we talk?”

Jesus, his touch. It’s the first time I’ve felt the weight of his palm on me since Aspen. It’s heavy. Huge. Callused. Instinctually I shift forward, my body no longer mine to command. He doesn’t move his hand. Just his thumb. It presses harder, dragging downward. I grip my armrests to keep from sliding to the floor. He stares at me, waiting for my answer.

Yes. No. Maybe. I choose silence.

The way our lives are entrenched with our friends, I’ll have to spend time with him, and I can’t keep pretending I can block him out. Moving here was about starting fresh, which means letting go of this grudge. But talking about Aspen could stir up more feelings, the same way the experience spurred my need to find Rose. If we talk about our time in the hot tub, it could unhinge me further.

Our waiter arrives to take our order, and Nico’s thumb moves again, a tiny brush, his skin against mine, sending a pulse between my thighs. My sanity plummets. I shout, “Chicken,” like a lunatic as I push away from the table.

Nico’s hand slides from my knee, but his eyes don’t waver. I feel his gaze on my back as I hurry to the bathroom. The second I get inside, I close the door and lean against it, thankful it’s not a public room with several stalls. I take a few deep breaths.

How can that bit of contact turn me inside out? The smallest touch?

Memories of his other touches flip through my mind, snippets of skin and ink, flashes of ecstasy.

The curve of his inked shoulder.

The sheer size of him.

We might not have had sex, and the details may be fuzzy, but there’s no doubt it was the hottest night I’ve ever had. What isn’t fuzzy is the time I spent with him in the hot tub prior, and how he took advantage of my vulnerability.

A small-town girl at heart, Kelly Siskind moved from the city to open a cheese shop with her husband in Northern Ontario, Canada.  When she’s not neck deep in cheese or out hiking, you can find her, notepad in hand, scribbling down one of the many plot bunnies bouncing around in her head.

She laughs at her own jokes and has been known to eat her feelings—Gummy Bears heal all.  She’s also an incurable romantic, devouring romance novels into the wee hours of the morning.

Add Hooked on Trouble to your shelf on Goodreads: http://bit.ly/2hLwMWX

Enter to win 1 of 15 free ebook downloads of Hooked on Trouble!

3 thoughts on “Review: Hooked on Trouble by Kelly Siskind”