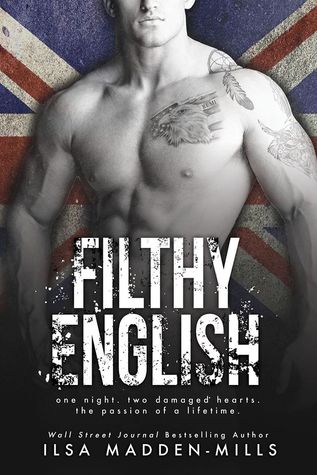 Two weeks before her wedding, Remi Montague’s fiancé drops her faster than a drunken sorority girl in stilettos. Armed with her best friend and a bottle of tequila, she hops a plane to London to drown her sorrows before fall semester begins at Whitman University.

She didn’t plan on attending a masquerade party. She sure didn’t plan on waking up next to the British bad boy who broke her heart three years ago—the devastatingly handsome and naked Dax Blay. Furthermore, she has no clue how they acquired matching tattoos.

Once back at Whitman together, they endeavor to pretend they never had their night of unbridled passion in London.

One night. Two damaged hearts. The passion of a lifetime.

After finishing the first book in the English series, I immediately began reading Filthy English. I had to. I fell in love with Dax in Dirty English, and I desperately needed to read his story. I’m so happy I did!

I was crazy about Filthy English! This second chance romance was filled with so many great things. The writing was just as captivating as the first book. I was immediately drawn into the story and kept on edge waiting to find out what would happen. I wasn’t expecting the story to unravel the way it did based on the synopsis, but I liked how little by little Dax and Remi’s story unfolded. Their connection was filled with drama and passion. I loved the lively banter between them. It was so much fun! I was rooting for them the entire book.

Dax was the star of this book. He wasn’t who I was expecting. Dax seemed so happy-go-lucky in Dirty English. Hidden behind his smiling exterior was a deeper, troubled man. He had some growing up and self-examining to do. Remi was the perfect woman to help him with that.

Remi had her life planned out, but her fiancé ditching her before their wedding had everything spinning out of control. She could no longer compartmentalize or deny her true feelings. I loved the way admitting to the truth to herself allowed her to become who she truly was. There was freedom in giving into the lust she felt for Dax.

Dax and Remi weren’t the only characters I loved. I really enjoyed the addition of Remi’s friend Lulu and Dax’s cousin Spider. I’m hoping I’ll get another English book with them in it! I was also happy to be reunited with Declan and Elizabeth for a couple of scenes in this one. I liked getting to see their relationship through Dax’s eyes.

Filthy English was a  wonderful addition to the English series. I loved it even more than the first book and I’m really hoping there’s more to come in this series!

One thought on “Review: Filthy English by Isla Madden-Mills”