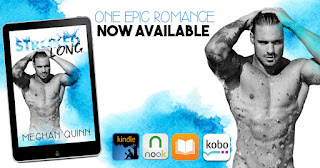 We’re so excited about the release of STROKED LONG by Meghan Quinn! 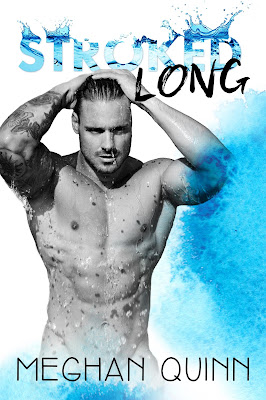 BLURB:
From his dirty-blond hair and breathtaking smile, to the abs from heaven and the irresistible V in his waistline, everything about Bodi Olympic-gold-medalist Banks screams hot piece of @$$.
Yet there’s more.
Dark shadows lurk behind his soulful, serious eyes.
I’m enamored. He’s captured me.
How can running an art foundation with Bodi Banks turns into a slow-burning, epic romance, even though he tries to push me away at every chance? How can I stay away from a broken, routine-driven man whose soul cries to be forgiven for a crime only he believes he committed? Or is that a lie?

**STROKED LONG can be read as a stand alone.

EXCERPT:
She guides me to the side, out of the way of all the energetic children. Energetic is the politically correct way to describe them. Demon children is not.

“Of course.” Rita waves her hand in front of her face, dismissing my worry. “She’s done very well for herself and made quite the donation to start a foundation in honor of her mom, who used to volunteer here.”

Eva and I know each other from school. When she was getting her master’s, I was completing my bachelor’s, but we were part of the same dorky art clubs and became good friends. Something tragic happened to her parents when she was young, but I never went into great detail about it with her, because frankly it’s none of my business. But I do know she and her brother donate as much time here as possible.

Bodi Banks, Olympic royalty, masterful swimmer, gorgeous human being, and the most closed-off and quiet man you will ever meet.

The man is incredible.

I’ve spoken two sentences to him the entire time I’ve known Eva, and they didn’t generate much conversation.

One being: “You’re Bodi Banks, the swimmer.”

Well, duh, Ruby, he knows who the hell he is. You try coming up with something intelligent to say when a beast of a man is standing in front of you, his denim blue eyes staring through you.

Another classic question coming directly from a bumbling idiot.

He politely grimaced at me, yes, grimaced, and walked away. It was humiliating. But, I always tell myself, it could have been worse. I’ve been known to throw a little fun punch here and there, so the fact that I held my fist at my side instead of saying, “So, you like swimming, huh?” while tapping his shoulder is a feat in itself.

But yeah, Eva’s brother is one of those mythical men you read about and follow on Instagram, wondering if he really does exist or if someone is Photoshopping your average Joe to make all women salivate over a little IG newsfeed.

Let me state for the record: he’s real. He’s so real I may have accidently poked him during my first encounter when I pointed out who he was . . . to him.

I’m awkward as hell. At least I didn’t poke his nipple and then make it hard. Lord knows if that happened, I would have laughed and pointed at the hardened tip while restraining my fingers from flicking it once more. 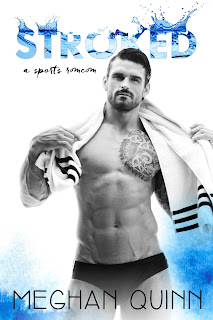 His body is chiseled from rock, sculpted by the weight room, and refined by water.

On a daily basis his skin is completely bare for everyone to see, tan and defined, only covered up by a minuscule piece of spandex. There is no denying his sex appeal.

I hate to admit it, but I’m head over heels infatuated with him.

There is one HUGE problem though. His achingly gorgeous abs, inked up arm, and cocky swagger belong to my boss, the high-profile, reality star bitch from hell and certified heinous human being, Bellini Chambers.

What I think is going to be an easy job assisting a glorified wench turns into a cluster f*ck of epic proportions.

Born in New York and raised in Southern California, Meghan has grown into a sassy, peanut butter eating, blonde haired swearing, animal hoarding lady. She is known to bust out and dance if “It’s Raining Men” starts beating through the air and heaven forbid you get a margarita in her, protect your legs because they may be humped.
Once she started commuting for an hour and twenty minutes every day to work for three years, she began to have conversations play in her head, real life, deep male voices and dainty lady coos kind of conversations. Perturbed and confused, she decided to either see a therapist about the hot and steamy voices running through her head or start writing them down. She decided to go with the cheaper option and started writing… enter her first novel, Caught Looking.
Now you can find the spicy, most definitely on the border of lunacy, kind of crazy lady residing in Colorado with the love of her life and her five, furry four legged children, hiking a trail or hiding behind shelves at grocery stores, wondering what kind of lube the nervous stranger will bring home to his wife. Oh and she loves a good boob squeeze!
Like me on Facebook: https://www.facebook.com/meghanquinnauthor
Find me on Goodreads:
https://www.goodreads.com/author/show/7360513.Meghan_Quinn
Visit my website: http://authormeghanquinn.com/