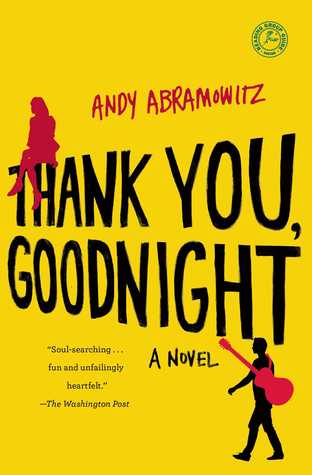 In Thank You, Goodnight, hailed by Billboard as “High Fidelity andAbout a Boy with a dose of Music & Lyrics thrown in,” the lead singer of a one-hit wonder 90s band tries for one more swing at the fence.

Teddy Tremble is nearing forty and has settled into a comfortable groove, working at a stuffy law firm and living in a downtown apartment with a woman he thinks he might love. Sure, his days aren’t as exciting as the time he spent as the lead singer of Tremble, the rock band known for its mega-hit “It Feels Like a Lie,” but that life has long since passed its sell-by date.

But when Teddy gets a cryptic call from an old friend, he’s catapulted into contemplating the unthinkable: reuniting Tremble for one last shot at rewriting history. Never mind that the band members haven’t spoken in ten years, that they left the music scene in a blazing cloud of indifference, and that the only fans who seem to miss them reside in an obscure little town in Switzerland.

If Teddy manages to snooker his band mates out of their adult lives, can a once immature, self-involved fallen idol find his way back to the top—and possibly back to the one who got away?Thank You, Goodnight is début novelist Andy Abramowitz’s hilarious, honest, and “unfailingly heartfelt” (The Washington Post) story about love, lyrics, and finding one’s legacy in the unlikeliest of places.

I’m going to have to chalk my experience of reading Thank You, Goodnight up to “It’s not you, it’s me.”  I’m giving it three stars, but it probably deserves more. I don’t know if it’s because I wasn’t in the mood for this book or that I just couldn’t identify with it? I had trouble getting into it. The writing was really good, but I wasn’t interested or invested in the story until the fourth chapter. After that, my interest in the story would come and go.

My interest in the story was sporadic because all the characters and their relationships felt like they were on the surface level. None of the deeper aspects of their relationships were truly explored. Thank You, Goodnight focused mostly on Teddy’s desire to reunite his band. I enjoyed getting to know his old band mates, but the relationship I was most interested in was Teddy and Sara’s. I wanted it to be the main focus of the story instead of what Teddy had to do to get the band back together.

Thank You, Goodnight was a good début novel with lots of great descriptions. I enjoyed the more colorful characters, but needed more of an emotional connection to them. I would recommend Thank You, Goodnight to readers who are looking for a mid-life crisis novel that’s on the lighter side.