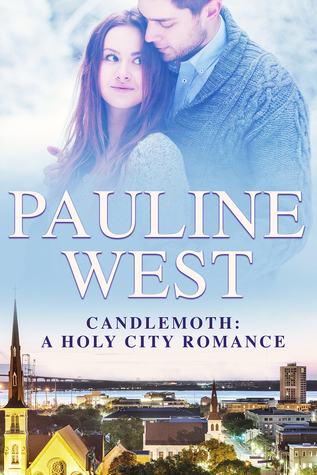 A bold and independent free spirit from the foster system of small town South Carolina, Lily is a survivor with skeletons in her closet. She knows what she wants and how to get it. And a spoiled rich playboy is not part of her plan- but Ry is irresistible.

The bad boy heir to the Calhoun fortune, Ry is a notorious Lowcountry playboy who’s never met a challenge like gorgeous Lily Inoue.

How can someone so wrong feel exactly right?

Steamy, exciting and beautifully written, this dramatic romance between a free spirit and a controlling playboy will appeal to fans of Sylvia Day and romance lovers everywhere.

Book One in the Holy City Romance series about a wild and fun-loving group of twenty-somethings in Charleston, South Carolina.

Candlemoth: A Holy City Romance was one of those books that I can see many readers falling in love with, but it frustrated me a little too much to give more than 3 stars. It’s not that I didn’t like the story, it just drove me a little crazy at times.

Lily is a young woman trying to move on from her past and make it on her own. She’s putting time in with a catering company, trying to stay on top of her expenses. She doesn’t need anything, especially a man, complicating her life.

Her dreams of self-sufficiency are threatened after Lily meets bad boy Ry at a party she’s helping cater. Ry is one of the most sought after men in South Carolina. He could have any woman he wants, but it’s Lily he’s determined to catch. Lily doesn’t get his attraction to her, but she loves the way he makes her feel.

Candlemoth: A Holy City Romance was well written and incredibly sexy. I enjoyed parts of the story, but there were some major turn offs for me in this one.

The dialog between Lily, her friends and family felt exaggerated. I don’t know how to explain it other than to say it was kind of cheesy. I couldn’t stand the way they talked to each other. There were so many pet names. Everyone and anyone had one for Lily. When her boss called her by one, I wanted her to scream sexual harassment.

I also had some problems with the insta-lust between Ry and Lily. Their “relationship” happened too quickly for me. I didn’t feel a connection between them. I mean, I knew they were attracted to each other physically. I just never got the emotional connection between the two. It made some of the drama toward the end of the book feel unrealistic to me.