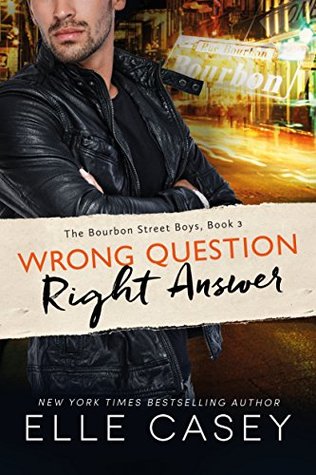 As a member of the Bourbon Street Boys private security firm, Antoinette “Toni” Delacourte is one strong woman, but despite her reputation for being tough as nails, she is haunted by her past mistakes. Now they’re catching up to her, and throwing her for a loop.

Ten years ago, Toni kissed Lucky, her brother’s best friend. Worried it would break apart the group she’d come to see as family, she walked away—straight into the arms of Charlie, and an abusive relationship.

For the past decade she’s tried to keep her feelings for Lucky platonic—he’s her friend, her colleague, and he’s got his own past to deal with. Free of Charlie but unable to shake his memory, Toni finds herself feeling vulnerable and unable to deny her attraction to Lucky any longer.

She’s always thought that kiss was her first mistake, but now she’s wondering whether the real mistake was running away.

Toni’s story is the one I’ve been most interested in reading since I began reading The Bourbon Street Boys series. Her dark history combined with her bad attitude and kick ass ways have made her an exciting character to read about. I was happy to finally get her story and even happier that it involved Lucky.

As teenagers, Toni and Lucky shared one kiss. Since then, they have been avoiding their feelings for each other. When a drunken night has them reenacting their first and only kiss, they find their attraction to each other has not disappeared over the years. It’s gotten even more intense. Toni knows she doesn’t deserve Lucky, so she does everything she can think of to push him away. Lucky isn’t one to back down from a challenge, though. He’s going to do everything he can to prove to Toni that she is everything he wants.

Honestly, I thought Elle Casey came up with the perfect situation for Toni and Lucky. She brought them closer together in a fun way. Toni wasn’t prepared for her feelings or relationship with Lucky. It brought out her vulnerable side. The confusion and anger she felt created a humorous storyline. It also showed what a strong, amazing character Lucky was. I loved the way their story played out.

Wrong Question, Right Answer was a great addition to The Bourbon Street Boys series. I can’t wait to see what Elle Casey has in store for the next book in the series. I’m really hoping it’s Toni’s brother Thibault’s story.