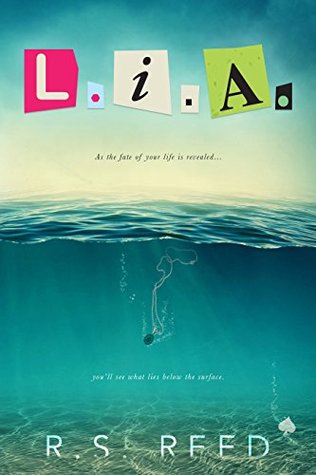 L.I.A.
Author: R.S. Reed
Publication Date: March 24, 2016
Genre: Young Adult, Contemporary Romance
Note: I received an electronic copy of this book from the author in exchange for an unbiased review.

Sometimes your journey in life isn’t up to you…

Katie Lauren would rather do just about anything than be shuffled off to boarding school for her eleventh grade year, but that’s exactly where she finds herself. It’s her worst nightmare come true.

Softening the crushing blow of leaving her hometown behind to attend Dunn’s Preparatory Academy in Tennessee, is the fact that Katie’s best friend, Nikki, will be going too. When they discover the most gorgeous boy to ever step foot in their town, John, will be attending the remote boarding school as well, junior year is looking up.

Katie’s world is turned upside down when a simple plane ride to her new school turns out to be not so simple. Uncovering deeply guarded secrets that her family didn’t want her to know, and being out on her own for the first time, leaves Katie wondering, when your whole world changes, who will be there to hold you up?

Her friendship with John is becoming complicated, and her relationship with Nikki is changing. Soon, events in her unfamiliar life lead Katie to believe that they are all in some real danger, and she may be the only one who can stop it. Now that fate has intervened, will love be the only thing to save her?

Katie’s never thought of herself as fearless. Just a normal girl, from a normal town. Life has other plans though, and now that she has someone, and something, worth fighting for, she’ll need to be braver than she ever knew she could be.

From the minute I started reading the Prologue of L.I.A., I knew I was in for an adventure. It was a really unique and well written story. I was surprised by the mysterious plot. L.I.A. combined so many different elements. There was friendship drama, romance, and magic.

The characters were your typical teenagers, and yet they weren’t. Katie was struggling with so many real feelings as she left for boarding school. She was worried about leaving home and trying not to be attracted to guy her best friend liked. But, before long, she would find those were the least of her worries.

The only issue I had with L.I.A. was the amount of descriptions in it. They did an amazing job of painting a picture of Katie’s life and everything around her, but they bogged down the story at times. There were just so many of them. I would have liked more dialog between the characters, especially in the beginning of the story.

I’m surprised this is R.S. Reed’s début novel. The writing was polished and creative. She built a mysterious and magical world in L.I.A. that readers are sure to enjoy.