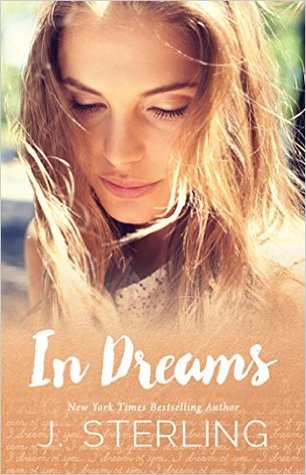 When Katherine Johns starts dreaming about a boy she doesn’t know, her college roommate Taylor is determined to find him. Convinced he must exist, Taylor is relentless… until she finds out exactly WHO the mysterious stranger really is.

The realization rocks the girls to their core and sends them down a path of unimaginable heartbreak as they learn to navigate their new reality.

A couple of weeks ago, I read Dear Heart, I Hate You. In it I got a peek of Katherine and Cooper’s relationship. There was a little mystery behind it and I had to know more, so I decided to read their story.

In Dreams really surprised me. First, the writing wasn’t as sharp as it was in Dear Heart, I Hate You. I realize now that was because In Dreams was J. Sterling’s début novel. Her writing was good, but it’s definitely become amazing over the years.

Second, it wasn’t based in reality, but fantasy. While some aspects of that fantasy were cool (fortune-teller), I would have rather it had been based in reality. The fantasy parts left me frustrated. I couldn’t understand why Kat was so wrapped up in her dreams. They were just dreams — no matter how they made her feel. It’s not like she could live life forever in her dreams. I hated the choices she was making because of them and the love triangle they created. I only liked that Kat that was grounded in reality with Cooper.

Cooper was just as awesome as I expected him to be. He was the most sought after hockey player and guy on campus, but he was so down to earth. He didn’t deserve what Kat put him through. I was surprised he took it so well and didn’t think she was crazy.

As for the other characters in the book, Taylor and Danny were a lot of fun. I loved the friendship foursome they created with Cooper and Kat. Kylie I could have done completely without. The only thing I liked was when she took charge of Cooper and Kat’s messed up situation.

So, would I recommend this book. Yeah, probably. It was a really good début novel. It just wasn’t what I was expecting. I think I would have enjoyed this book more if I had either read it prior to reading Dear Heart, I Hate You or realized it was going to be based in fantasy rather than reality prior to reading it.