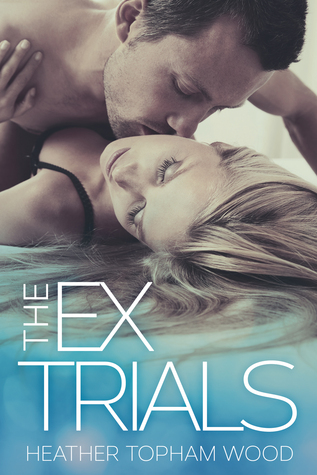 One dream vacation in paradise.
One co-ed bachelor and bachelorette party.
One week marooned with my ex.

Six months ago, Casey Silvers ended her scorching romance with sexy rocker Cole Caldwell. None of her friends know the true reason behind her sudden change of heart. Despite her claim of their chemistry fizzling out, her feelings for Cole had never gone away.

After receiving the invitation to her best friend’s co-ed bachelor and bachelorette getaway, Casey knows she must once again face Cole. For one week, she’ll be forced to party alongside the man who has come to despise her. The tropical cruise is meant to be a trip to paradise, but Casey is certain it will turn out to be a vacation from hell.

But as the ship leaves port, past secrets are revealed—secrets that could change the fate of Casey’s romance with Cole. With forces keeping them together, Cole and Casey soon discover that the passion between them has yet to extinguish.

The Ex Trials is a second chance love story between two people who have tried to move on from each other but can’t.

Six months ago, Casey made the biggest mistake of her life. She ruined a chance at love with her soul mate, Cole. She knows she did the right thing breaking up with him, but it still feels so wrong. Now, she’s stuck on a cruise ship with him — and all her friends who have no clue the real reason they broke up. Casey’s hoping she can make it through the cruise without her secrets ruining the rest of her relationships.

Cole knows why Casey broke up with him, but he’s having a hard time accepting it. He should have been able to return to his rock star ways, but he can’t seem to forget her. Cole thought hooking up with random women on the cruise would be the way to show Casey he’s moved on, but he can’t stop thinking about her.

As the cruise gets on its way, Cole goes out of his way to prove to Casey that he’s the man for her. As much as Casey wants him, she’s just as scared he might find out the truth of what really happened before they broke up.

The Ex Trials was a fast-paced, surprisingly deep story. It had all of the steamy, sexy moments you expect in a New Adult romance, but it also dealt with some tough issues in a realistic way. I liked the way the author portrayed the situation.

It was easy to understand Casey’s motives in this book. She was doing what she thought was the right thing for Cole and her friends. Her self-esteem had taken a hit and she was doing everything she could to stay strong when her heart was completely broken.

Cole was a character I didn’t quite get. It was cool that he was willing to pursue Casey after why she ended things with him, but I was surprised that he wasn’t madder. I would have been — even if he still loved her.

I liked reading about Casey and Cole reconnecting, but I would have like to have seen their relationship immediately before and after they broke up. The author gives us flashbacks to what went down for Casey, but I feel like I would have connected better to the characters had I been able to read the entire progression of their relationship. Maybe you get to see part of it the first couple of books. I have to admit I haven’t read them, so I wouldn’t know. Although, the way the story is told, I’m guessing not. But that’s what this story was missing for me personally.

The Ex Trials was a dramatic second chance romance perfect for romance readers who like a love story that touches on deeper issues.