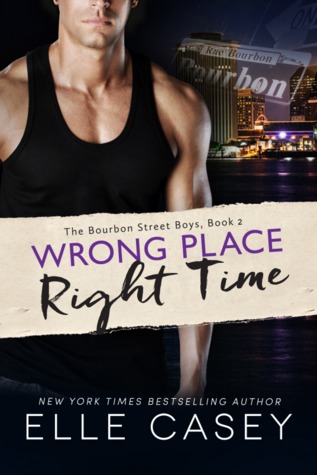 Note: I received a free, advance copy of this book from the publisher via NetGalley in exchange for my unbiased review.

Jenny’s single-parent life revolves around her kids and her job, which means that hours of Animal Planet and strings of computer code are about all she has time for. Not that Jenny’s looking for adventure or romance—she’s the type of woman who believes in playing it safe.

When Jenny is called upon to do some consulting for the Bourbon Street Boys—a New Orleans private security firm—she knows she should stay away. They conduct surveillance on known criminals and put themselves in harm’s way pretty much every day, so No is the obvious answer…Problem is, there’s a guy on the team with a body to die for and a dimple that just won’t quit luring Jenny in, tempting her to throw all caution to the wind.

Will Jenny take the risk or will she do what she’s always done—play it safe and wait for the right time?

When Jenny loses her job, she’s stuck taking a freelance position with her sister May’s company. Taking the job with The Bourbon Street Boys makes Jenny uneasy. They deal with some bad people and tend to skirt the lines of the law. Jenny’s a single mom with three young children. She can’t be putting herself at risk, but getting fired has forced her to do it.

Jenny’s new job comes with one big benefit, though. His name is Dev and he’s tall, bald and handsome. Jenny can’t help but be attracted to hulking Dev, but she knows there’s no way he could be into a warn out, fluffy mom with three kids. Dev is interested, though. He gets how hard being a single parent is and is looking for someone to share his and his son’s life with.

I loved Wrong Place, Right Time. It was funny, sexy and fast-paced. Jenny, with her ex-husband related negative self-esteem, was easy to relate to. She didn’t see herself as sexy anymore, just a dowdy mom. I know several moms, myself included, who would easily relate to her. Dev was amazing. Not only was he physically handsome, but he was beautiful on the inside as well. I loved the support he gave Jenny and the confidence he helped her find.

What really made this book amazing, though; was the combination of Dev and Jenny’s kids. They added an extra special element to the story. It was so sweet to see them all interact.

If you’re looking for a steamy read filled with humor and a little suspense, you should read Wrong Place, Right Time. It’s the second book in The Bourbon Street Boys series, but can easily be read as a standalone novel.