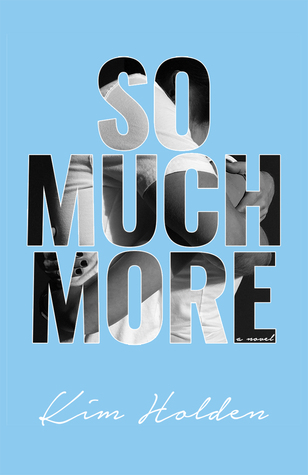 Title: So Much More

I feel like I’ve been hit by a semi truck. I don’t think a book has ever taken me through such an array of emotions before. Happy, sad, angry, frustrated, devastated, elated, surprised. Name an emotion, I felt it. I was amazed at the amount of topics Kim Holden was able to cover in this story. It wasn’t the most comfortable story to read the majority of the time, but it was beautiful written.

Most stories begin at the beginning of a relationship. So Much More begins at the end of one. Miranda and Seamus are in the midst of a turbulent divorce. Miranda will do anything to come out on top and be the winner — even if it means destroying the only person who has ever truly loved her. Seamus is taking the divorce hard. He’s putting on a brave face for their children, but it’s taking it’s an emotional and physical toll on him. As they each strive to get what they want from their uncoupling, Miranda and Seamus are forced to confront their pasts together and their futures apart.

So Much More was told in three view points: Miranda, Seamus and Faith. They were well-developed and complex characters. Each had something different and important to bring to the story.

First, let’s talk about Miranda. I absolutely, positively HATED Miranda. I can honestly say I’ve never hated a character so much. She was such a bitch. Every time I read a chapter in her point of view, I would cringe and pray for karma to kick her ass. Reading her chapters made me ill. Did I mention I hate her? I can’t say it enough. Grrr…

Next, there’s Seamus. I loved Seamus. Even at his worst, he couldn’t have been a better person. The love he had for his children was heartwarming. His struggles were real and broke my heart. Seamus’ chapters were hard to read at times because I’ve known several people who have gone through what he was going through on the emotional and physical end of things. I had such admiration for the way he lived his life. He was truly inspirational.

Finally, a ways into the story, there’s Faith. She’s kind of a free spirit who has made the best out of what life has thrown her way. Faith’s positive outlook and loving nature were incredibly beautiful. I loved the perspective she brought to the Seamus and Miranda’s story. She was the light Seamus needed in the storm of his divorce.

The three main characters weren’t the only important ones in this story, though. All of the supporting characters had a major part. They helped shape Miranda, Seamus and Faith’s lives in many different ways. Most of them I loved, a few I loathed. My favorites were definitely Seamus’ kids. Each of their personalities was so special and I felt like I had met them somewhere before.

So Much More was a hard book to rate. It wasn’t the emotionally uplifting story that Bright Side (one of my favorite books EVER) was. I went back and forth several times on how many stars to give it. So much of it filled me with anger and hate. I didn’t like feeling uncomfortable in that way. But the more I thought about it, the more I realized I didn’t dislike the book. I disliked a character and her actions. The story was actually rather brilliant. Kim Holden approached the topic of a nasty divorce head on and laid it out for everyone to see. It may have been emotionally brutal to read, but in a time in my life where more of my friends are getting divorced than married, it felt real and honest. So Much More is a book that will stick with me for a long time because of all the things it made me feel and, to me, that’s a mark of a 5 star book.