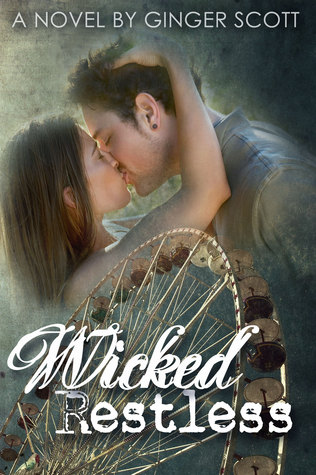 Andrew Harper knows what people in his small town say about his family. His brother, Owen,  may have tried to protect him from the rumors and hurt, but Owen’s gone now. Andrew’s on his own now to prove everyone wrong.

Then, Andrew meets new girl Emma Burke at school. She’s the most beautiful girl Andrew’s ever seen. She’s also smart and sweet. Emma’s heard the rumors, but she doesn’t seem to care. It makes being stuck in the small town of Woodstock bearable.

Emma may not be the talk of the town, but she has problems of her own to deal with. Problems she’s keeping secret from Andrew. She knows she needs to tell him, but she just wants to be a normal teen for a while.

As Andrew and Emma are quickly falling for each other, they will be faced with a choice that will change the directions of their lives forever. Their choices will not only divide them but ruin them.

Andrew always wondered what he would do when he saw Emma again. Now, he knows: get revenge. He has the perfect opportunity to do it and he’s going to take it. But as he puts his plan in motion, the truth of what happened all those years ago starts to present itself — along with feelings he thought were long gone.

If Andrew and Emma can’t make peace with their past, they may lose out on their future.

“Dude, socks. If you just wore socks, this wouldn’t have happened.”

Wicked Restless started out sweet, cute and funny like many YA contemporary romances. Andrew and Emma’s instant connection during P.E. class is funny and cute. I was so excited for this couple!

“I want this girl to be the girl – my girl. The one I take to things and experience everything with.”

Then, everything gets all complicated and messed up. It turns into the angst filled NA romance I was expecting. It plays with my emotions in ways I didn’t expect.

The decisions Andrew and Emma make tear them apart. It tore me apart! It was heart breaking to read. I hurt for Andrew. He was trying to be such a good person and all it did was prove the rumors true. I couldn’t help but dislike Emma. I felt like she ruined his life. I kind of hated her. I honestly wondered how Ginger Scott could ever redeem her at this point.

Flash forward five years. Andrew has changed. He’s no longer trying to prove he’s not what people think he is. Andrew runs into Emma again. Understandably, he hates her and wants revenge. (I kind of want revenge on her myself!) He doesn’t care about anything but making Emma suffer.

It’s from this moment that every choice Andrew makes is gut wrenching for me to read. I didn’t like what the past five years had done to him. It was so sad to see who Andrew had become. When Andrew takes his anger out on Emma, I couldn’t help but feel sorry for her. I went quickly from hating her to understanding her. I wanted Andrew to understand her, too. I wanted the sweet and innocent Andrew back.

I’m not going to give anything else away from the story. Just know that I absolutely loved Wicked Restless. It played with my emotions in so many different ways. One minute, I was happy. The next, I was angry. It went on the entire book! Everything felt so intense. At times, the story took turns I wasn’t quite sure I believed. That didn’t matter, though; Ginger Scott’s writing is so good and packed with so much emotion that I could look past those things. Wicked Restless was an amazing follow up to Wild Reckless. Now, I hope Ms. Scott will give us a spin off in the form of Andrew’s roommate, Trent. Love that dude.

If you are a NA reader looking for an emotionally intense series filled with beautiful writing, I would highly suggest Ginger Scott’s Harper Boys series.